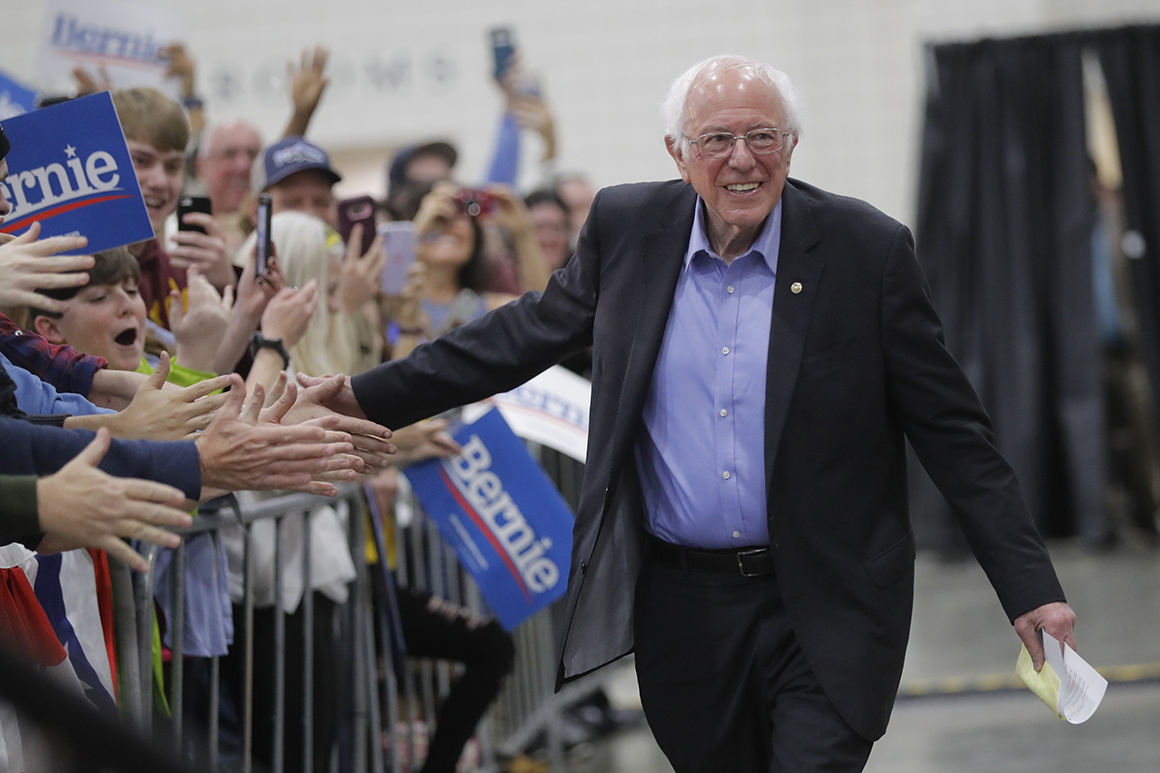 The DNC’s superdelegate rules have changed dramatically since 2016, in large part because of the sharp criticism levied by Sanders and his allies about the clear favoritism many superdelegates showed toward Hillary Clinton.

Party officials eventually agreed to weaken the power of superdelegates, allowing them to vote only if no candidate wins 1,991 pledged delegates on the first vote.

Several Democrats have pointed out that Sanders’ call for his party to back the frontrunner — rather than risk a dramatic 11th hour nomination fight — would go against the rules that he and his allies made happen.

“He was promoting the change that we currently have, which is to take superdelegates out of the first round,” added Rep. Anthony Brown (D-Md.), who has endorsed former South Bend, Ind.. Mayor Pete Buttigieg.

“There’s going to be a fight no matter what the outcome is,” he added.

And for some Democrats who witnessed the ugly infighting between the Vermont Independent and the DNC four years ago, Sanders has struck a nerve by working to avoid a contested convention after specifically calling for one in 2016.

“I absolutely one-thousand percent disagree,” Rep. Greg Meeks (D-N.Y.), who has been vocal in his opposition to Sanders and has endorsed Bloomberg, said of Sanders’ suggestion.

“We got the rules that he said he wanted, and now they want to change it,” Meeks said. “They want to game the system. I’m not for gaming the system.”

Other senior lawmakers point out that DNC officials and delegates will need to tread carefully at the conventions, acknowledging that Democrats can’t spurn Sanders as the nominee if he has nearly enough delegates.

The latest election results sent straight to your inbox.

“It’s going to be pretty tough to take the nomination away from someone who’s got a strong plurality,” said Rep. John Larson (D-Conn.), who has not yet endorsed a candidate. “If it’s neck and neck and close and everybody’s close, that’s one thing. But if there’s a clear winner, it’s hard to overturn.”

“People can fantasize about a brokered convention but it’s going to be awfully hard to overturn the will of the people,” Larson said.

Sen. Tim Kaine of Virginia, a former chair of the Democratic National Committee, said the path forward could depend on how close the leading candidate is to having a majority of delegates.

“If nobody’s close to a majority, then that means huge percentages of the [Democrats] didn’t want even the frontrunner, so that leads to some tough decisions,” Kaine said. “Say somebody has 32 percent, that means 68 percent didn’t want them. So I mean I don’t think they have a claim to any mantle.”

Several congressional Democrats have also argued that if Sanders, or any candidate, has a plurality of delegates, it shouldn’t be difficult to attract a majority of delegates on the second ballot.

“They should work until they get one who has the majority, it’s a process,” said Sen. Ben Cardin (D-Md.), who hasn’t yet endorsed a Democratic presidential candidate. “The party process is set up to bring about a candidate who can garner the majority of the votes. Until you get there you’re not there.”

A potential contested convention would be intensely chaotic for Democrats, who are already divided internally over Sanders and whether he can beat Trump while helping down-ballot candidates.

“This is uncharted. I don’t think we’ve had a true brokered convention since ‘68 or maybe even ‘60 and that’s a long time,” said Senate Minority Whip Dick Durbin (D-Ill.).

But he added that much could change before July: “There’s a lot of elections, a lot of caucuses before this final decision. A month from now we’ll be a lot smarter.”

In competitive Senate races, Democratic incumbents and challengers are already beginning to distance themselves from Sanders as Republicans are seizing on his status as a democratic socialist and his proposals like Medicare for All.

Moderate Democrats have vocally warned that Sanders could cost them swing districts in both the House and Senate, even if the party is more mixed about Sanders’ chances of beating Trump.

Sanders’ allies on Capitol Hill, meanwhile, have vehemently rejected that argument, pointing to a massive ground game and grassroots support that could fuel unprecedented turnout in November.

Some Democrats argued that it’s too early to speculate about a brokered convention ahead of Super Tuesday, which could again shake up the race.

“The party’s primary goal needs to be unity against Donald Trump,” said Sen. Richard Blumenthal (D-Conn.), adding that he still believes one candidate will receive a majority of delegates before the convention.

“If I had to predict, the only prediction that I would make with absolute certainty is there will be a lot of surprises.”

Heather Caygle contributed to this report.