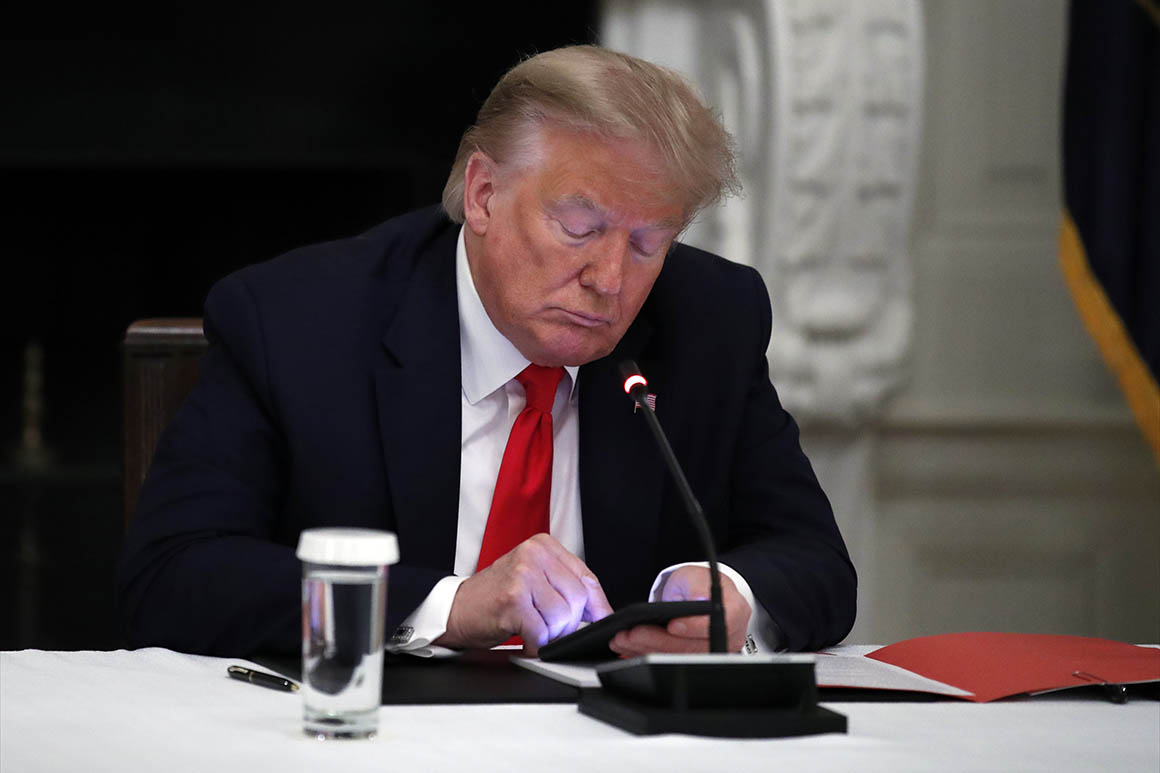 It took five days to resolve the shutdown, leading Republicans to worry the same thing could happen this fall as the president urges his supporters to vote, when the stakes will be much higher.

People familiar with the chain of events said Verizon, T-Mobile and AT&T flagged potential regulatory problems with the peer-to-peer messaging operation, which differs from robo-texting in that texts are sent individually, as opposed to a mass blast. But within Trump’s orbit, the episode has further fueled suspicions that big tech companies are looking to influence the election. In recent weeks the president has accused Twitter and Facebook of censoring conservative voices and first son Donald Trump Jr. has alleged that Gmail is sending reelection campaign emails to spam folders.

“They’re all working to get out the vote, so to see telecom come down and prevent any campaign or organization from getting out the vote is troubling.”

“A campaign’s email and text messaging list are some of the most important assets they have in 2020,” said Eric Wilson, a Republican digital strategist who worked on Marco Rubio’s 2016 presidential campaign, adding that it was “really very concerning to see that such a significant issue happened and to see that it wasn’t resolved in a timely manner.”

Representatives for the telecom companies declined to comment for the record. But people close to Verizon, T-Mobile and AT&T said the decision was not made by them, but rather by third-party administrators they employ to monitor text messaging and protect consumers from spamming. They strenuously denied that there was any partisan intent and say they were merely following guidelines conveyed by the Cellular Telecommunications Industry Association, a trade group that represents mobile phone outfits.

The organization declined to specify what the Trump campaign had done wrong, but said in a statement, “We expect all senders — whether airlines, schools, banks or campaigns — to include clear opt-out language and gain prior consent before sending a text.”

“These simple steps help protect consumers from spam and maintain text messaging as a trusted medium for everyone,” it added.

Democrats also use text messaging in their campaigns, but the digitally focused Trump reelection effort is particularly emphasizing it. It has spent the last few years harvesting cell phone numbers, including from attendees to the president’s trademark rallies. The onset of the coronavirus pandemic has ensured that voter outreach will be more digital — and text message-centered — than usual.

This month’s operation was intended as a dry run to determine whether the texting program would run into problems — and to avoid reprising Mitt Romney’s Election Day experience in 2012, when his lightly-tested voter turnout program crashed as people headed to the polls. Come fall, the Trump political apparatus is looking to send tens of millions of messages to supporters prodding them to vote.

The problem was eventually ironed out after a series of conversations with the wireless companies and their third-party administrators. But the damage was already done.

The Independence Day message was get-out-the-vote-themed, but the resulting shutdown of the campaign’s texting infrastructure also hampered donor outreach. While Republican officials declined to estimate exactly how much they had lost in prospective donations, they acknowledged it was likely substantial. Trump used the long holiday weekend to accuse liberals of conspiring to tear down monuments — the kind of red-meat messaging that typically fires up his small donor base.

Republicans are calling it the latest in a string of decisions by tech titans that are hurting Trump.

Tim Cameron, a digital strategist who has worked for the National Republican Senatorial Committee and ex-House Speaker Newt Gingrich, called the shutdown “odd,” especially while companies like Facebook and Lyft launch programs encouraging people to cast ballots this fall.

“They’re all working to get out the vote, so to see telecom come down and prevent any campaign or organization from getting out the vote is troubling,” Cameron added.

Technology news from Washington and Silicon Valley — weekday mornings, in your inbox.

The legal wrangling centers on a 1991 federal law which aims to shield consumers from a deluge of unwanted robocalls and texts. But changing technology has created ambiguities around the statute’s requirements, and businesses with an interest in reaching out to people via text have called on the Federal Communications Commission to provide greater clarity.

More recently, the FCC has ruled that peer-to-peer texting does not require consent, as long as texts are sent individually and not by auto-dial or robo-dial.

Democrats, too, have run into problems. Last month, two Minnesota residents brought a class action lawsuit against Bernie Sanders’ presidential campaign over what they said were routine spam texts to which they had never consented.

“Peer-to-peer texting has quickly become a critical tool for Republicans and Democrats. Both sides agree, it’s going to lead to more Americans voting, a great thing for our country,” said Gary Coby, the Trump campaign’s digital director. “There is bipartisan commitment to continue working with mobile carriers and the entire mobile messaging industry to ensure the channel remains open and secure.”

It’s not the first sign of tension between Trump and the country’s telecom heavyweights.

After failing to block AT&T from buying CNN-owned Time Warner last year, Trump called for a boycott on the wireless giant, writing on Twitter that if “people [stopped] using or subscribing to @ATT, they would be forced to make big changes at @CNN.”

The president this spring cheered the retirement of longtime AT&T executive Randall Stephenson, tweeting that, “Anyone who lets a garbage ‘network’ do and say the things that CNN does, should leave ASAP. Hopefully replacement will be much better!”

Trump has yet to weigh in on the text message shutdown. But Republicans acknowledge it has left them rattled.

“I understand that telecom might want to change the rules about how political campaigns operate on their platforms,” Cameron said. “But those changes should take place after the election, and once they’re in place when you’re in a period just a few months before the election, it’s not the time to change them.”