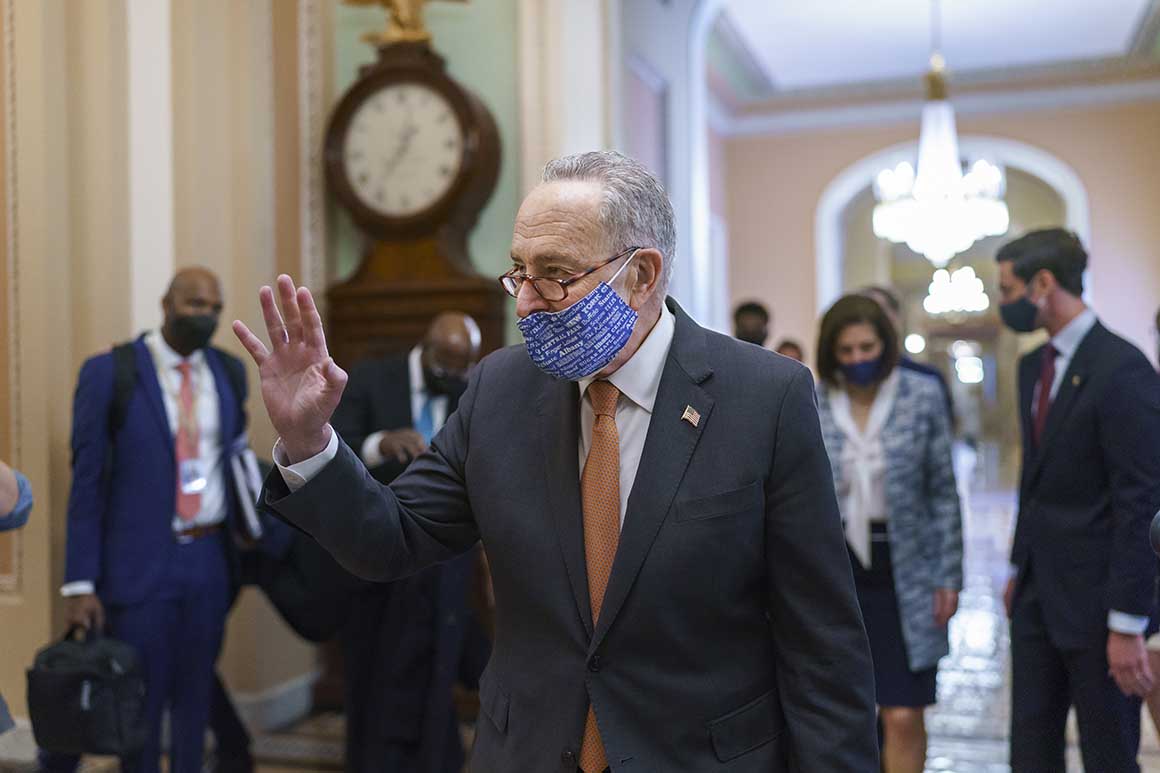 The move to start the so-called budget reconciliation process comes a day after President Joe Biden met with a group of Senate Republicans, who are offering a $618 billion counterproposal. Although the meeting lasted for two hours Monday evening, the price tag for a final package remains a key sticking point and Biden didn’t indicate any discomfort with reconciliation.

Trying to pass Biden’s $1.9 trillion coronavirus relief plan will amount to Democrats’ first major legislative effort since winning full control of Washington. The process kicks off this week. The Senate will pass a budget that instructs committees to write the relief bill, which includes increasing the minimum wage to $15 an hour and providing $400 in weekly federal unemployment benefits through September. As of early afternoon, it appeared the party has the full unity it needs to at least move forward.

With a 50-50 Senate, Democrats have no room for error. Some moderate Democrats like Sens. Kyrsten Sinema (D-Ariz.) and John Hickenlooper (D-Colo.) have not explicitly indicated how they’ll vote this afternoon. But Sen. Joe Manchin (D-W.Va.) said Tuesday that he plans to vote to move forward on the process, although he opposes raising the minimum wage to $15.

“We must address the urgency of the Covid-19 crisis,” Manchin said in a statement. “But let me be clear — and these are words I shared with President Biden — our focus must be targeted on the Covid-19 crisis and Americans who have been most impacted by this pandemic.”

It’s unclear whether the Senate parliamentarian will allow certain provisions in Biden’s package, such as raising the minimum wage, to be included through the reconciliation process. But the Biden administration and Senate Democrats argue that the economic conditions from the pandemic require a significant — and speedy — response from Congress.

“The Senate is going to move forward this week with the process for producing the next bold rescue package,” said Senate Majority Leader Chuck Schumer. “Time is a luxury our country does not have and let me be very clear… We are not going to dilute, dither or delay.”

Biden and Treasury Secretary Janet Yellen joined Democrats’ caucus call on Tuesday. During the call, Biden told Democrats that while his meeting Monday with 10 Republican senators was positive, the GOP’s package is too small, according to sources on the call. Yellen proceeded to answer questions from senators and encouraged the caucus to pursue a large package.

While Democrats argue that there’s nothing precluding Republicans from supporting the $1.9 trillion Biden plan, GOP senators are criticizing Democrats for pursuing a process that will garner no Republican support after Biden said he would work across the aisle. They argue, too, that money from previous relief packages remains unspent.

“The president spoke about unity on Inauguration Day,” said Sen. John Barrasso (R-Wyo.), a member of GOP leadership. “You have a 50-50 Senate and a narrowly divided House. To me, if there’s a mandate, it’s a mandate to move to the middle.”

But, he added: “It does seem that left to Schumer and [Speaker Nancy] Pelosi, it’s their way — that’s it.”

The use of reconciliation to pass legislation along party lines is not unusual, particularly if one party controls all three branches of government. Senate Republicans used reconciliation twice in 2017, under former President Donald Trump.

“I feel good that we’ve identified what needs to be done and have a plan for getting it done. I worry about delay, every day that goes by that doesn’t pass,” said Sen. Elizabeth Warren (D-Mass.). “That’s been the Republican approach from the beginning, it’s Mitch McConnell’s approach: hold up, hold up, hold up.”

Senate Democrats have been talking to Bill Dauster, a deputy chief of staff for former Senate Majority Leader Harry Reid, about how boldly they can use the powerful budget tool.

In a recent interview, Dauster said a minimum wage hike should qualify for reconciliation because it would reduce the amount of federal assistance that low-income people receive and increase their taxable income. Dauster also noted that Democrats have several other avenues to enact sweeping priorities if their priorities face roadblocks, including blowing up long-standing reconciliation rules to push their priorities through with a simple majority.

But Sen. John Cornyn (R-Texas) said Monday that such a step would amount to a “back-door method” of eliminating the legislative filibuster.

Caitlin Emma contributed to this report.