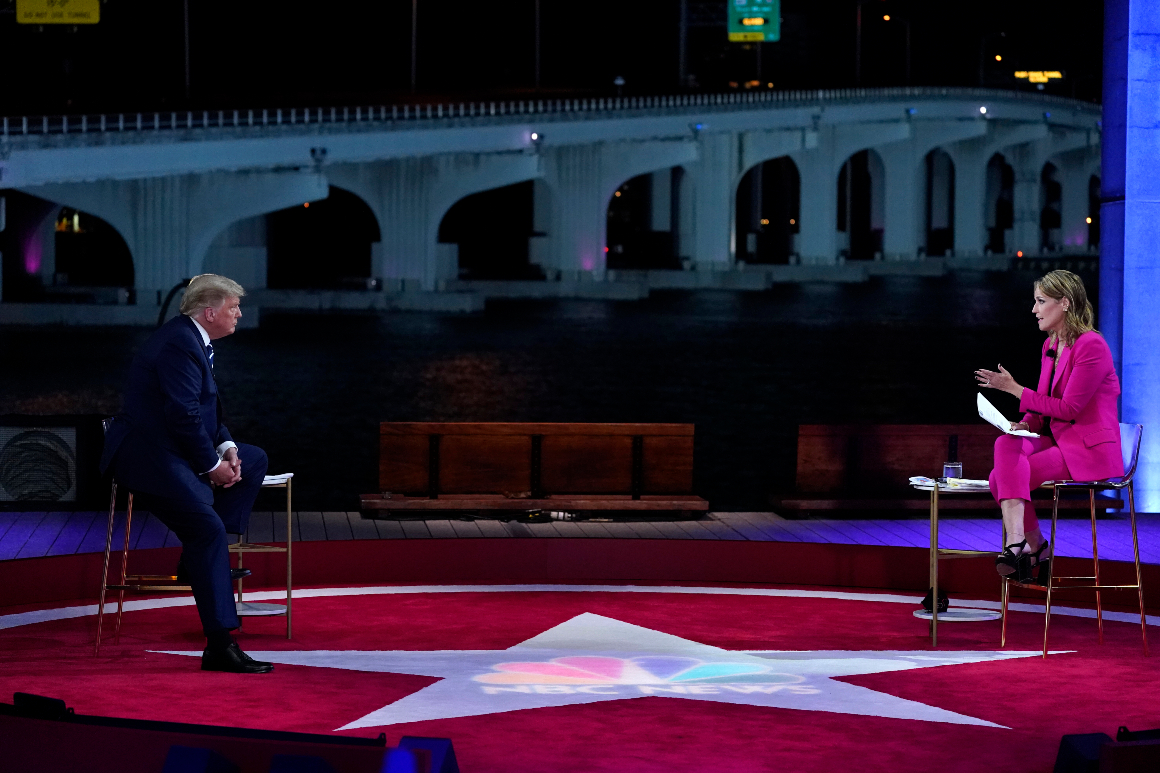 Guthrie’s own smile rarely disappeared, but the questioning was insistent and persistent. She challenged him on his factual assertions. No, it’s not true that 85 percent of mask wearers caught the virus. No, you have no health care plan to replace the Obamacare you’re trying to kill in court. And she became close to indignant when Trump explained that he simply retweeted a bonkers conspiracy theory that Barack Obama had ordered the killing of SEAL Team 6 to cover up for not actually killing Osama Bin Laden. People could make up their own minds, Trump said. “I do a lot of retweets.”

“You’re the President,” she said, “you’re not some crazy uncle.”

When he claimed to know nothing about the QAnon conspiracy that Democrats are leaders of a satanic cult of pedophiles, Trump said, “I don’t know anything about them.”

“I just told you,” she said—leading Trump to observe that QAnon was “very much against pedophilia. I agree with that.” (It was at that point that one could hear the foreheads of the Trump communications team slamming into the table). And she often followed up a questioner, by reminding Trump that his DACA program, which he claimed his administration “was working very hard on,” effectively zeroed out any new applicants.

What Guthrie was doing in many cases was to employ the technique of a “truth sandwich”—to surround dubious or flatly false comments with factual responses (No, mail ballot fraud is essentially non-existent) and by returning to the same question if the president did not give a straight answer (When did you last have a negative test? Did you have a test the day of the debate?).

It’s the kind of question that cannot, or is not, often asked at press conferences, because reporters will not respond to a Trump brush-off of one reporter by posing the same question. And it shouldn’t only apply to the unique circumstances of a candidate like Trump, whose distance from reality—either intentionally or out of cognitive insufficiency—can be measured in light years.

At the Biden town hall, held in an almost empty auditorium in Philadelphia, there were fewer sparks flying. But there was some probing tag-team work on the questioning. Both moderator George Stephanopoulos of ABC and a few of the “regular people” posed questions far more specific than the all-too-often “what will you do to make things better?” type. One questioner, listing the progress toward peace in the Middle East and in other regions, asked “doesn’t the Trump administration foreign policy deserve some of the credit?” (Not much, Biden answered). Another pushed Biden on fracking, and Stephanopoulos followed up by asking whether Biden was “trying to have it both ways”—supporting it for the sake of Pennsylvania, while advocating an ultimate abandonment of fossil fuels.

Even on court packing, Biden eventually inched away from his blatantly non-responsive answers, acknowledging that he is no fan of the idea, but that the behavior of Senate Republicans in rushing Amy Coney Barrett onto the Court might have an impact on his thinking. Stephanopoulos pressed him hard enough that Biden finally pledged to reveal his stand before the election—and after he had seen how the confirmation vote was handled. (Stephanopoulos often held back from cutting Biden off when some of his answers threatened to spill over into Jimmy Kimmel’s late-night time slot; it would have meant more questions from the audience).

It may have taken the jaw-dropping years-long series of Trump’s blatant falsehoods to finally prod a journalist into full-on confrontation, but it should serve as a template for how to push future candidates off their talking points. There are hard questions about abortion, for example, that arise from both parties’ platforms: The Republican plank, read literally, would ban the practice absolutely; the Democratic platform would permit it under any and all circumstances. More urgently, there are millions of Americans waiting for desperately needed relief to save their homes and feed their families. Is it really possible that weeks or months will go by with no way to resolve the differences between the White House, Senate Republicans and Speaker Pelosi?

Tough questions will not be welcomed, as Pelosi’s testy slaps at Wolf Blitzer’s questions about a relief package demonstrates. And at Presidential press conferences, Trump is more than willing to simply ignore a question or end the conference.

That’s something he could not do Thursday night, unless he was willing to storm off the set. It’s an indication that the Town Hall format can be the forum for the kind of persistent, appropriately “impolite” inquiry that would genuinely serve the public.

12 Books to Read Now Before They Become Your Next Binge...