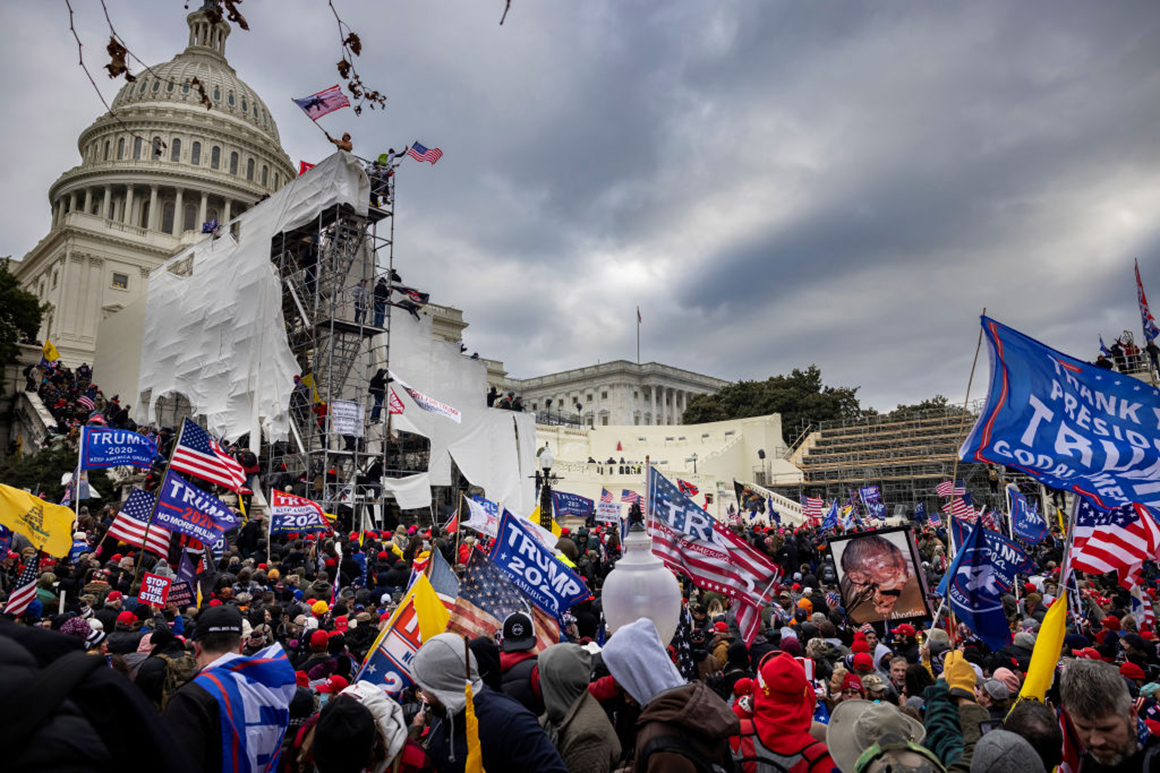 The new indictment appears to be the third major conspiracy case lodged by prosecutors in connection with events at the Capitol on Jan. 6.

While the two other large conspiracy cases focus on groups known as the Proud Boys and the Oathkeepers that allegedly stormed the Capitol building, only one of those charged in the new case is accused of actually entering the Capitol. Instead, prosecutors allege that the remainder crossed police lines and went onto the Capitol’s upper west terrace.

Two men charged in the new indictment, Alan Hostetter and Russell Taylor, were among organizers of a Virginia Women for Trump rally held outside the Supreme Court on Jan. 5, endorsing then-President Donald Trump’s baseless claims of widespread fraud in the 2020 presidential election.

In a November YouTube video and at a December rally in Huntington Beach, Calif., Hostetter called for “execution” of those involved in what he said was a “coup” that was driving Trump from office, according to the indictment.

In a Telegram chat on the morning of Jan. 6, Taylor said, “I personally want to be on the front steps and be one of the first ones to breach the doors,” the indictment alleges.

Prosecutors say Taylor urged rioters to push through police lines during the chaotic scenes at the Capitol, at one point shouting, “Inside!”

The indictment accuses Warner of climbing through a broken window at the Capitol shortly after 2 p.m. that afternoon.

The FBI confirmed that in late January, it carried out search warrants at properties in Orange County, Calif., that CNN tied to Hostetter and Taylor.

The four other men charged in the new indictment — Erik Warner, Felipe Martinez, Derek Kinnison and Ronald Mele — traveled to Washington in a rented SUV after organizing in another Telegram chat labeled as the “California Patriots-DC Brigade,” according to prosecutors. Before departing for Washington, the four men posed for a photo flashing a hand sign associated with a Three Percenter group, the indictment alleges.

Kinnison said the group was driving rather than flying because of the extensive gear they were bringing, the indictment says. “We will have lots of gear from medical kits, radios, multiple cans of bear spray, knives, flags, plates[,] goggles, helmets,” he allegedly wrote, before telling his colleagues to erase the chat on Jan. 5 “for opsec purposes.”

While Taylor later posted online that he “stormed the Capitol” on Jan. 6, he told others via text message that he never entered the building because he “had weapons,” the indictment said.

Asked by someone on the evening of Jan. 6 what would happen next, Taylor replied, “Insurrection!” according to the indictment.

Hostetter’s wife and at least one other person joined him and Taylor on the trip to Washington, according to the indictment, but they were not charged.