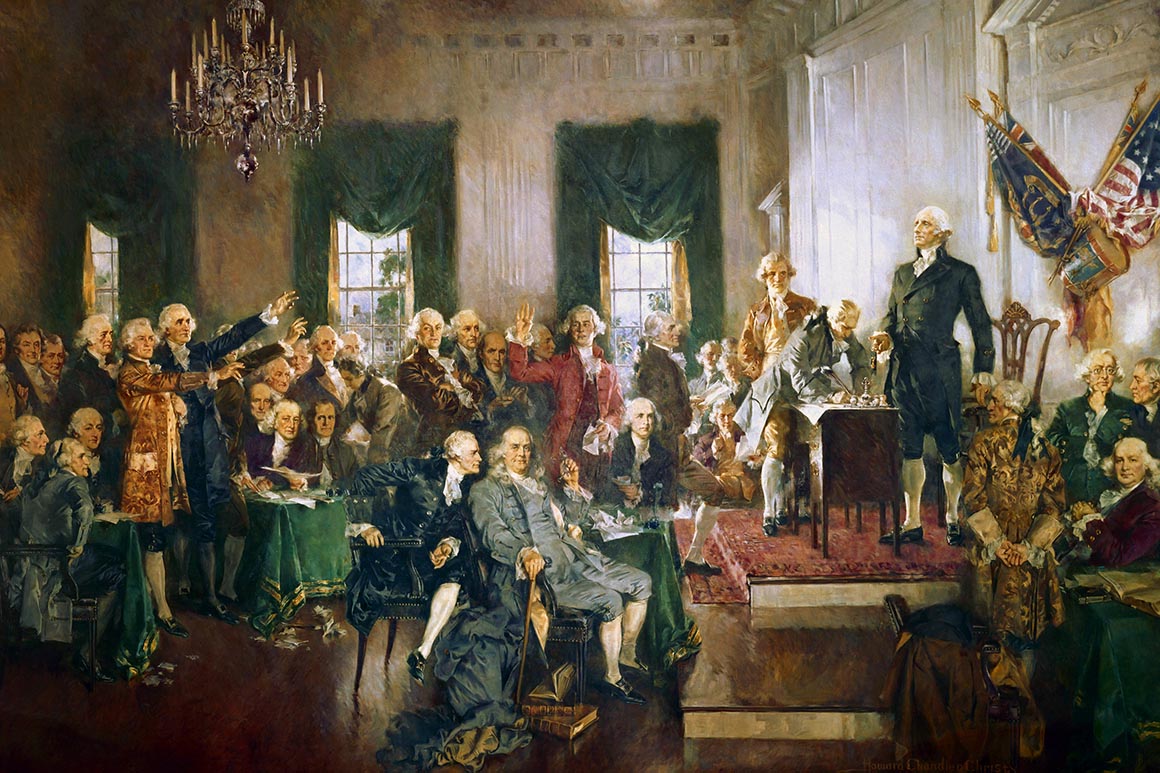 Even though the Constitution’s text does not explicitly address whether the Senate can try a former president, the evidence from English practice, state constitutions, the Constitutional Convention, and the Federalist Papers—all core sources for originalist legal arguments—suggest that its authors fully expected that the Senate would use its power that way. When Rep. Jamie Raskin (D-Md.) argued Tuesday that the Framers created no “January exception” for presidential abuses of power — meaning the president doesn’t get a free pass for acts committed just before he leaves office — he was echoing arguments that the framers made (and also the arguments they conspicuously did not make) in their Philadelphia debates as they drafted the Constitution.

In the run-up to Trump’s trial in the Senate, many legal scholars made cogent historical arguments along the same lines. The Trump team, following a small number of commentators, focuses on a narrow textual approach: The impeachment clause says “president,” not “former president,” end of story. But a look at the details of what the Founders really discussed, and how they thought about impeachment, makes this point seem at best painfully narrow, and at worst willfully dismissive of the Founders’ understanding about the power and purposes of impeachment.

The founders did not invent impeachment. As Hamilton wrote in the Federalist Papers, a core source of original meaning, the framers “borrowed” the model from the English. And, as Raskin pointed out, every English impeachment during the lifetimes of the Founders was of a former official. During the convention debates on impeachment, George Mason mentioned the impeachment of Warren Hastings, a former British official in India, which began during the summer of 1787. No delegate raised any concern about its impropriety. No early state constitution prohibited impeaching a former official — and in fact, Delaware allowed its chief executive to be impeached only “when he is out of office.” Early state constitutions are usually core evidence for originalists. The English and early American practice suggest an emphasis more on punishment—for instance, disqualification from future office—than on removal.

In the 1787 Convention debates, as recorded by James Madison, four convention delegates explicitly discussed the potential problem of incumbent presidents abusing their power at the end of their terms in order to get re-elected. Several of them specifically mentioned that election fraud and manipulation of the electoral college could be grounds for impeachment. Trump’s lawyers conveniently ignore these debates, but the House brief spent roughly four pages on them and cited a blog post I had posted on January 16 on the Convention debates.

The details of how the Founders discussed impeachment are striking—and they point damningly at late-term conduct like Trump’s. In a debate that was summarized over six pages of Madison’s notes, including questions about the timing of impeaching presidents, the notion of whether or not the Senate should have this power was never questioned. Legal scholars, especially originalists, would call this “the dog that didn’t bark.”

When the Convention specifically debated the timing of impeachments, delegates William Davey, George Mason, Edmund Randolph, and Gouverneur Morris (the latter three considered among the most influential delegates) implicitly rejected the Trump team’s arguments. On July 20, 1787, the Convention turned to the proposed impeachment language, and two delegates, Morris and Charles Pinckney, objected. Madison recorded Pinckney’s objection: A president “ought not to be impeachable whilst in office.” Morris explained that such impeachments of sitting presidents would hand Congress too much power over the president, who might be compromised by fear of impeachment. This argument is similar to the concern about whether a sitting president can be indicted and prosecuted.

William Davie answered, “If [the president] be not impeachable whilst in office, he will spare no efforts or means whatever to get himself re-elected. [Davie] considered [impeachment of sitting presidents] as an essential security for the good behaviour of the Executive.”
Morris saw the public as the final arbiter— “In case he should be re-elected, that will be sufficient proof of his innocence,” he said—but neither Morris nor anyone else in the long ensuing debate suggested that a president who wasn’t re-elected should be able to avoid impeachment for what he’d done in office. And in fact, several delegates addressed Morris by emphasizing their concerns that presidents might abuse their power at a particularly dangerous time: during bids for re-election.

On that same day, George Mason was especially concerned with election fraud and the electoral college — with presidents corrupting electors to get elected, and then attempting to stay in power “by repeating his guilt.” It defies logic to think that a president who tried such a scheme could only be impeached if he somehow succeeded and stayed in office—especially given the British precedent of out-of-office impeachments, from which the founders were drawing.

Then Randolph emphasized broad application: “Guilt wherever found ought to be punished”—reflecting the view that the purpose was not just removal from office, but more broadly punishment for abuses of power.

In the final speech of the debate on July 20, and perhaps the most significant, Gouverneur Morris, a supporter of a strong presidency, conceded that his colleagues had persuaded him to drop his concern about timing and to vote for the impeachment clause. After noting the infamous “Secret Treaty of Dover,” in which England’s Charles II made a corrupt deal with France’s Louis XIV that led to war, Morris concluded that “treachery” justified impeachment. But then he added other reasons, including “Corrupting his electors, and incapacity.”

He proposed that incapacity, which implied no transgression, be punished only by “degradation from his office.” But corruption during a re-election effort deserved full impeachment, removal and disqualification from office. Impeachment proceedings for such abuses would by definition have to take place after the election. And implicitly, Morris was highlighting the urgency of disqualification for treachery and corruption of the electoral college, regardless of removal. With Morris’s reversal, the Convention moved to vote, and impeachment prevailed 8 to 2.

In the six pages of debates summarized by Madison, timing of impeachments was a key question, and no one raised a concern about holding the actual impeachment trial after a president had left office. Again, it is the dog that didn’t bark. It was the norm for English impeachments, it was recognized in state constitutions, but it was never even questioned as the Founders drafted the Constitution.

Keep in mind that the founders were considering a scenario in which there was no 22nd Amendment limiting presidents to two terms. The Framers had to worry about a president who might abuse power to hold on to office not just once, but multiple times. Without term limits, it was even more important to deter presidents from using their vast powers to stay in office for long periods of time. That meant election shenanigans had to be punished. Given the short period between the election and inauguration, especially in the 18th century, and even before inauguration was moved from March 4 to January 20, that suggests the framers envisioned trials that might spill beyond the impeached president’s term. England’s impeachment of Hastings, for example, took seven years.

A fair reading of the convention debate indicates that the framers supported a broad impeachment process for presidential misconduct at the end of their terms, especially with respect to re-election abuses, corrupting or contesting electors, and insurrections. Together with their respect for the English tradition of impeachments of officials who had left their offices, that suggests Rep. Raskin was correct in arguing against the idea of a “January exception.”

This is a classic case where a close reading of the Constitution is only the beginning of interpretation, not the end. Given the lack of clarity of the text itself, we look to the writings of the framers to clarify the purposes of the clause — which lines up with common sense: The original meaning of the impeachment clauses is that they applied to ex-presidents, as well as presidents.

Along with Trump, originalism was on trial this week in the Senate. The point of originalism—and I say this as an originalist legal scholar—is that our Constitution is not supposed to be a wordy document narrowly fixing every point of law, but a framework that depends upon historical context to find meaning and purpose. As Senator Sasse and then-nominee Amy Coney Barrett explained in a helpful exchange during her confirmation hearings, the text is not enough to understand what the Constitution calls for; that’s why, Barrett explained, the Fourth Amendment right against unreasonable searches applies to cars, cellphones, and heat detection outside houses.

Contradicting the arguments they conveniently invoke for judicial appointments, the vast majority of Republican Senators this week ignored the whole principle of originalism. The historical record before the Senate is clear: The founding generation understood that former officials can be impeached and tried. In looking at the Republicans’ vote this week, it’s hard not to say that the Republicans didn’t just get their history wrong: They imposed their own preferred meaning on the Constitution, following partisanship rather than historical evidence. They embraced the very lawlessness they claim to reject. They used Trump’s four years to fill the federal bench urgently with ostensible originalists. But when the rule of law is now on the line, the Senate Republicans effectively voted to disqualify “originalism” itself.