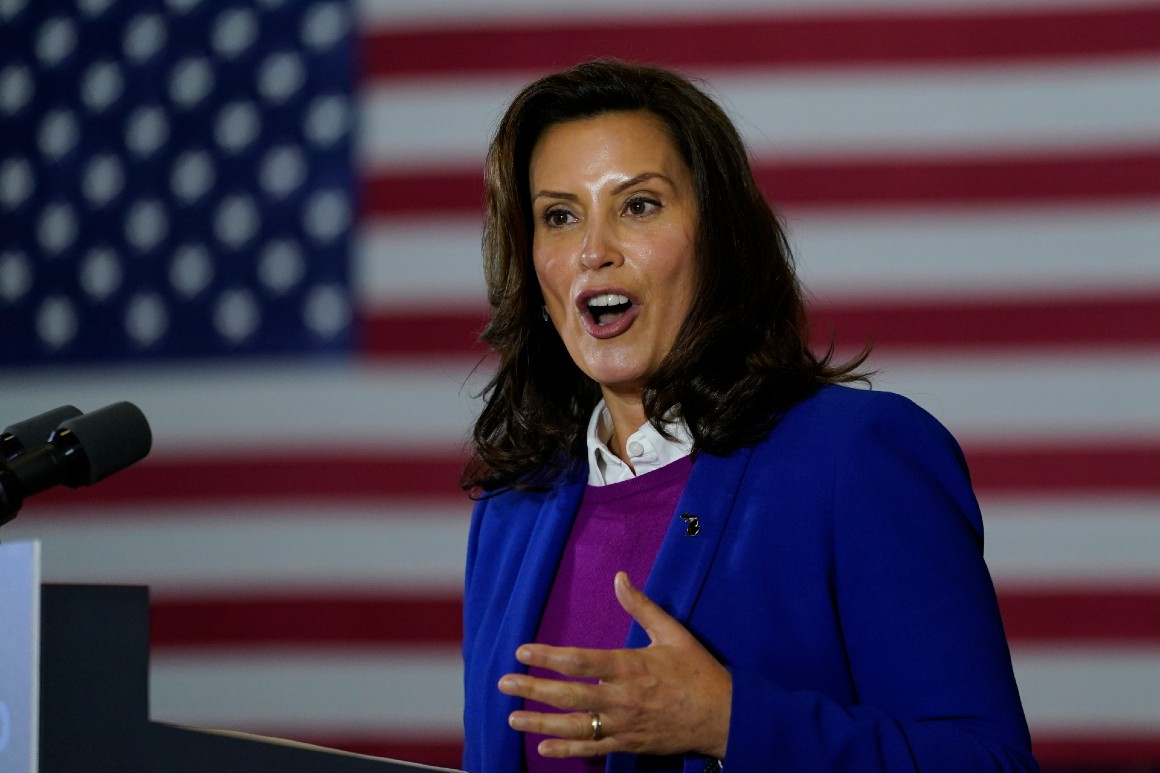 Trump’s supporters erupted into chants of “lock her up” — a refrain from the 2016 campaign originally lobbed at Hillary Clinton, but since repurposed against Whitmer and other high-profile Democrats — which Trump did little to dissuade.

“Lock ‘em all up,” he said before pausing to soak up energy in the crowd.

The striking visual quickly came to Whitmer’s attention, who responded while the president was still speaking.

“This is exactly the rhetoric that has put me, my family, and other government officials’ lives in danger while we try to save the lives of our fellow Americans,” she tweeted. “It needs to stop.”

Trump and other critics of the measures taken by governors to combat the virus — which has now infected more than 8 million Americans and killed at least 210,000 across the country — had singled out Whitmer, a freshman governor in a battleground state, on numerous occasions. In April Trump tweeted in all caps “Liberate Michigan” and more recently derided her as the “lock-up queen.”

Earlier this month federal and state law enforcement officials announced an array of charges — including violations of Michigan’s anti-terrorism statute — against at least seven people in connection with an elaborate plot to kidnap and possibly harm the governor.

But the alleged kidnapping plot, which included members of a militia group the FBI also suspected off planning to potentially kill police officers and possibly Whitmer herself, has done little to tamp down criticism against her by Trump and other conservatives.

Trump then urged the FBI to target antifa, a frequent comeback when the president is questioned over his previous equivocations on white supremacist and other extremist groups.

“Every single time the President does this at a rally, the violent rhetoric towards her immediately escalates on social media,” Saylor wrote. “It has to stop. It just has to.”

Former Trump aide turned critic Anthony Scaramucci blasted Trump’s rhetoric, saying it was “inciting violence,” and accusing other GOP leaders of being complicit for not denouncing it.

“Hey guys: Trump is inciting violence against a sitting governor, @VP @senatemajldr @GOPLeader your silence is complicity. Is this how you want to be remembered?” Scaramucci wrote on Twitter.

How Emma Roberts Found Her King in Garrett Hedlund

Does Reese Witherspoon Want to Run For Office? Her Surprising Answer

How Emma Roberts Found Her King in Garrett Hedlund

Stephen Amell Returns to Podcast He Had Panic Attack On 9...

Does Reese Witherspoon Want to Run For Office? Her Surprising Answer