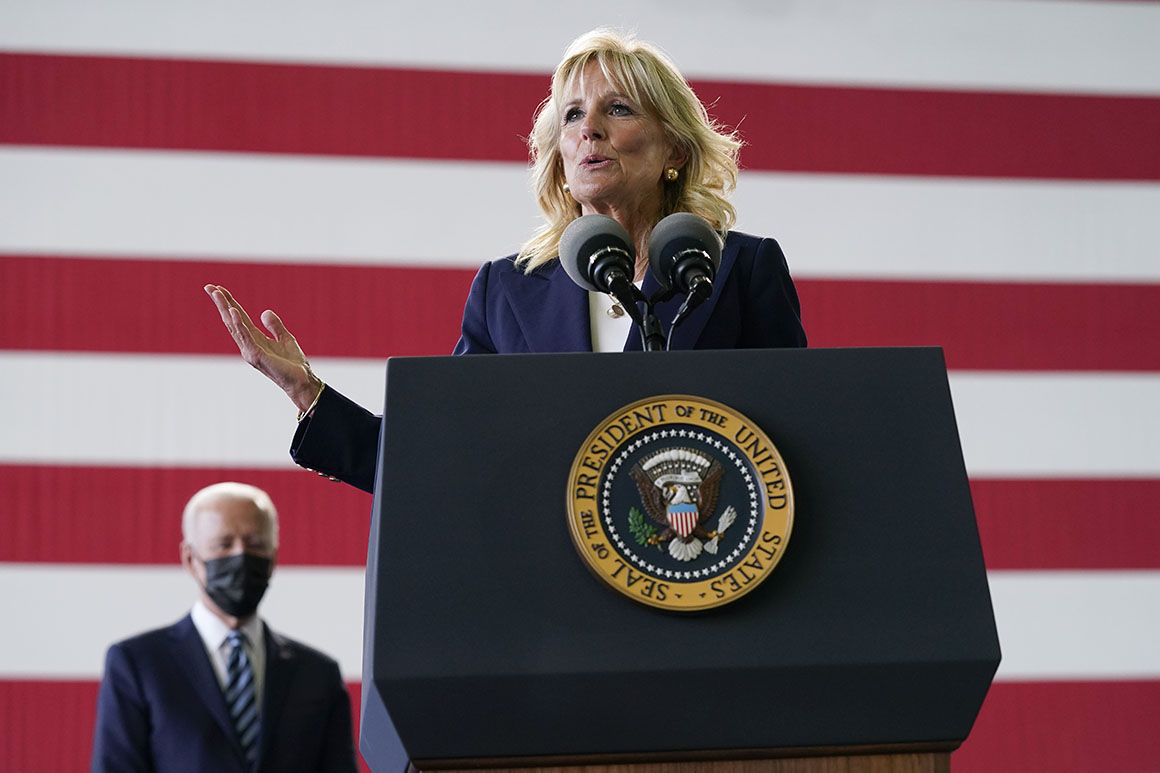 Aides say she’s “happy and honored” to handle those traditional duties most associated with being first lady: the dinners, standing beside the president at official events, etc. But she’s also working to modernize the role for both herself and future first ladies. The foreign trip is just the latest evidence of her focus.

“She doesn’t want to go over there and just have people write about her dresses and clothes. When she travels with her husband, she also wants to do substantive things on her own,” one aide familiar with her planning and thinking said. “She will play the ceremonial role but she has things she wants to do. She doesn’t want to just go and be arm candy.”

It’s the operating mantra of her office. Her first few months in office have been a flurry of activity proving that point. She’s gone on more than 20 trips, the vast majority of them solo, pushing the pandemic recovery message, visiting schools, talking up free community college and services for military families.

Taking office during a pandemic has actually fit Biden’s approach to the job. It has allowed her to dodge some of the more ceremonial aspects of being first lady, like hosting parties, and instead focus on policy. It has also allowed both her and the president to play the roles the Trumps notably didn’t: consolers in chief.

“I think we want somebody who’s real and can relate to us and to relate to the struggles that people face with the economy and Covid and everything. I think that that’s what she’s going to try to do: is bring that empathy,” Kate Andersen Brower, author of “First Women: The Grace and Power of America’s Modern First Ladies,” said.

That empathy is often on show during those trips. At a vaccine clinic in New Mexico in April, Biden thought a woman looked scared to get her vaccine so she walked over to her and put her arm around the woman’s shoulder as her shot was administered.

There’s also a sense that Biden is working to be a first lady that’s a bit more approachable than her predecessor.

“I think we do tend to look at the president and the first lady with this, usually with a sense of reverence and we put them on this pedestal. I think it helps that you had a sense of humor about yourself. Dr. Biden’s supposed to have a great sense of humor,” she said. On April Fool’s, Biden donned a short black wig, black face mask and a badge with the name “Jasmine” on her shirt and handed out ice cream bars to the press corps traveling with her until she laughed, revealing who she was.

That sense of normalcy is something she is cognizant of, an aide says, but it’s also just “Dr. B being herself.” An aspect of being herself is continuing to teach English and writing at Northern Virginia Community College while balancing her official duties.

Years ago, it would’ve been a risky move: a first lady working or wanting to hold more substantive events on a foreign trip with her husband or at all. Most famously, Hillary Clinton was hit over and over as first lady for stepping out of the expected bounds, most famously leading failed health care reform efforts. There are no signs that Biden is going to go as far as Clinton, who clearly had higher political aspirations. But her keeping her day job is still breaking the mold.

“It’s hard for me to think of it in historic terms,” she said before Inauguration Day, noting that she “taught all eight years while second lady,” from 2009 to 2016.

Biden may not cop to it publicly, but Brower said she is slowly changing the expectations for the role of first lady of the United States: not too serious, substantive on her own and independent. “I think she’s carved out this niche and probably because she’s been waiting to do this job for decades. So she kind of feels comfortable with it,” said Brower.

The pandemic changed how we vote. These states are making the...