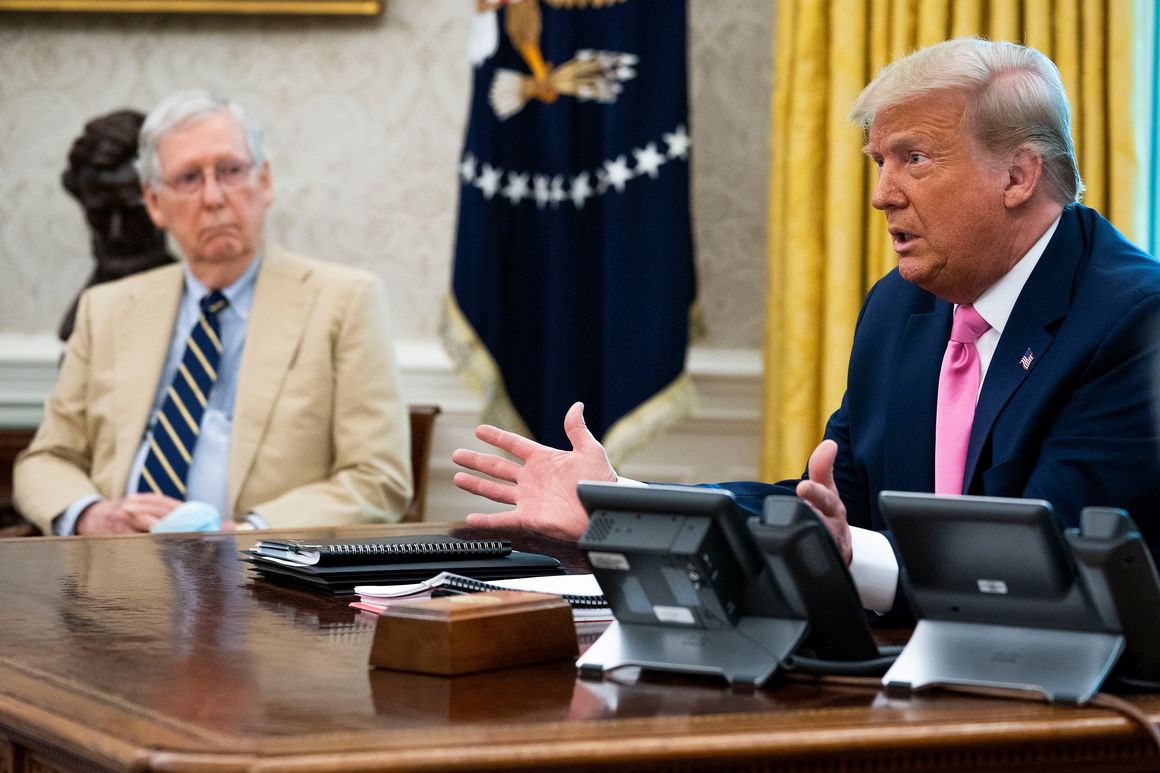 From whence did this new Republican spine come? They never made a show of contradicting his banana republican ideas before, so why did they start making a fuss about a postponed election now?

Institutional Republicans have always been obedient to Trump, but like hungry dogs, their obedience has been conditional. They have submitted to him or averted their eyes during his maximum moments of overreach, not out of direct fear of his wrath but because 1) they feared he might turn voters against him by “primarying” a pol and 2) they had no incentive to abandon him.

But in recent months, as Trump has botched the Covid-19 recovery and crashed the economy, and as he has descended in the polls, Trump’s stranglehold on his fellow Republicans has weakened to a fingerhold. Practically every major news outlet—the Los Angeles Times; the Chicago Tribune; the Washington Post; the New York Times; the Atlantic; POLITICO; NPR, etc.—has foretold the disaster the impending Trump defeat will visit upon the Republican Senate, and that has bestowed on Republicans the sauve qui peut incentive they needed. If Trump is truly losing voters, he’s also losing sway over Republican legislators. Trump-sympathetic lawmakers, such as Sens. Susan Collins and Graham are already suffering in the polls thanks to their association with the man. They know that prolonging the contact with Trump only increases the chances of infection. This is not to say that one tweet in July has caused Trump’s Republican brothers to abandon him, but the calculated distancing by top GOP leaders signals their willingness to break up with the party boss.

Congressional Republicans stiffed Trump for another reason. Every Republican running this year has a budget, a strategy to win, and a calendar that stops on November 3, and while it might help Trump for them to postpone the election, it’s too late in the process for a date change to help them. In fact, changing the date can only hurt Republicans who will have to defend their votes as a blatant attempt to throw the election to Trump. Because most incumbents, Republican or Democrat, win reelection—postponement will only introduce unhappy chaos into these cinched contests, and neither party wants that.

Finally, there’s no way the Democratic-controlled House would ever oblige Trump by voting for a new Election Day, so the idea of changing the date—something that can’t happen—doesn’t even merit the status of hypothetical.

By combining stupid with impossible at a time when stupid plus impossible can no longer work for him, Trump has signaled his desperation. It’s no accident that Federalist Society co-founder Steven Calabresi, a longtime defender of all things Trump, picked the delayed election moment to stab him in the back with a Thursday New York Times op-ed calling the Election Day delay unconstitutional and insisting on his impeachment and conviction if he doesn’t repent.

If Trump fails to rebound in the polls, be on the lookout for more social distancing by his Republican colleagues and supporters, even the evangelicals, then informal articles of separation and, by November, divorce.

******
Remember in April when, wiping his feet on the Constitution, Trump claimed dominion over state governors? “When somebody’s president of United States, the authority is total,” he said. Those were the good old days. His Republican colleagues would swallow any swill he served. Send swill to [email protected]. My email alerts want to postpone the time they go out. My Twitter feed knows how to make stupid plus impossible work. My RSS feed bought Greenland while you weren’t looking.

Executive Order on Fighting the Spread of COVID-19 by Providing Assistance to Renters and...

Executive Order on Fighting the Spread of COVID-19 by Providing Assistance...