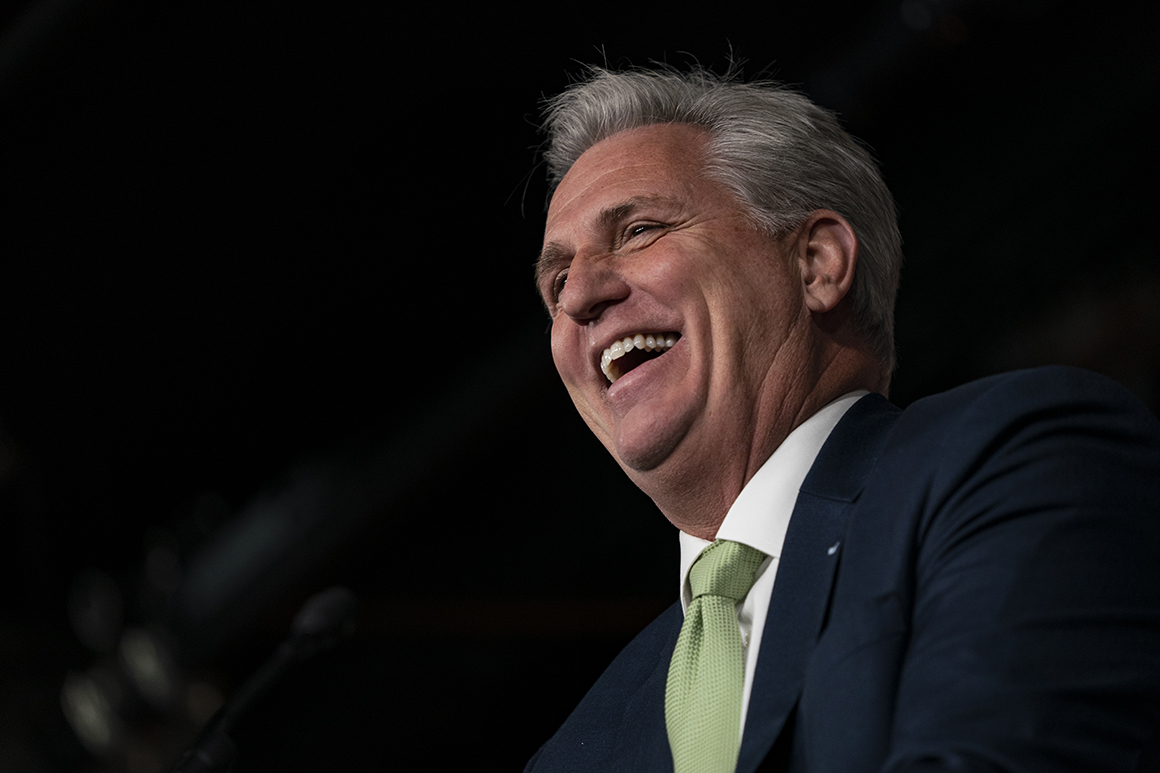 A spokesman for Sen. Chuck Grassley (R-Iowa), the chairman of the Senate Finance Committee, echoed a similar sentiment.

“The jobs report underscores why Congress should take a thoughtful approach and not rush to pass expensive legislation paid for with more debt before gaining a better understanding of the economic condition of the country,” the spokesman said.

But McCarthy didn’t dismiss the need for another aid package. Two areas he said Republicans want to address are liability protections for employers who reopen their businesses and tax incentives to encourage businesses and events to resume.

“This is a good sign. It tells Congress that what we’re doing is working,” McCarthy said. But, he added, “we still might need to look to help.”

President Donald Trump — who has also talked about the need for more stimulus money — took a victory lap during a press conference at the White House Friday morning, casting the jobs report as the “greatest comeback in American history.”

“This is better than a ‘V,’ this is a rocket ship,” Trump said. “Now the trajectory is great.”

Top Democrats, meanwhile, sought to take credit for the positive economic news as well, pointing out that they pushed Trump and Republican leaders to spend hundreds of billions of dollars more than the White House had originally proposed to deal with the emergency.

“The stimulus helped get the economy going, but we need a lot more,” Senate Minority Leader Chuck Schumer (D-N.Y.) said on MSNBC. “ A 13% unemployment is not a time to get joyous.”

Schumer added: “The action we did helped break the worst of this recession. But if we don’t do more, we could slide right back, right back, and it could be even worse. I hope & pray that Trump and the Republicans don’t take this as a sign to be complacent.”

McCarthy, however, slammed Democrats for temporarily blocking more funds for small business loans until they got additional money for the aid program, which the GOP ultimately agreed to.

“Think about those two weeks that [Speaker Nancy Pelosi] held it up. We’d probably have even more jobs,” McCarthy said.

Not all the data from the Bureau of Labor Statistics was good. More than 2.3 million Americans reported that they’ve permanently lost their jobs, rather than just being furloughed, with more than 21 million Americans unemployed overall. The unemployment rate among African Americans stood at 16.8 percent, and 17.9 percent for Hispanic Americans. Those grim figures may take years to reduce to the levels seen at the start of 2020.

Republicans had already been pushing back against a Democratic effort to extend the enhanced unemployment program until January 2021, arguing that lawmakers should wait to see whether additional relief is needed before they rush to cut another check. Congress has already passed more than $3 trillion in coronavirus relief funds, which has caused heartburn among fiscal conservatives.

Senate Majority Leader Mitch McConnell (R-Ky.) promised House Republicans in a phone call last month that the extra unemployment benefits would not be renewed again, seeming to draw a red line in the negotiations. Trump also expressed opposition to extending the aid program during a Senate GOP lunch.

But some conservatives were still worried that Senate Republicans would cut a deal with Democrats. In a letter to Senate and House leadership earlier this week, a group of House GOP lawmakers — led by Rep. James Comer of Kentucky — raised concern that the benefits are creating unintended consequences by providing a disincentive for Americans to return to work.

“Numerous employers in my home state of Kentucky have told me … that they’re having to persuade employees to return because their [unemployment insurance] assistance is simply greater than their earnings before,” Comer said. “This is moving the mission of regaining our economy backwards.”

Democrats, however, counter that Congress must extend benefits for the millions struggling to pay their bills as the U.S. faces its most uncertain economic climate in generations. Regular unemployment insurance, they note, covers just half of workers’ pay on average.

The divide over jobless benefits is likely to surface as one of the biggest flashpoints for McConnell and Speaker Nancy Pelosi as they lead their parties in talks on the next major aid bill. The outcome will determine not just how much help goes to unemployed Americans but how the parties can position themselves in a fierce campaign in which Congress and the White House are up for grabs.

But even some moderate Democrats — particularly from areas of the country that appear to be suffering more from the recession than from the virus itself — are privately hesitant to renew the enhanced unemployment benefits. Those Democrats say they’ve heard from employers in their districts that are struggling to bring back workers who earn more on unemployment.

Sarah Ferris contributed to this report.