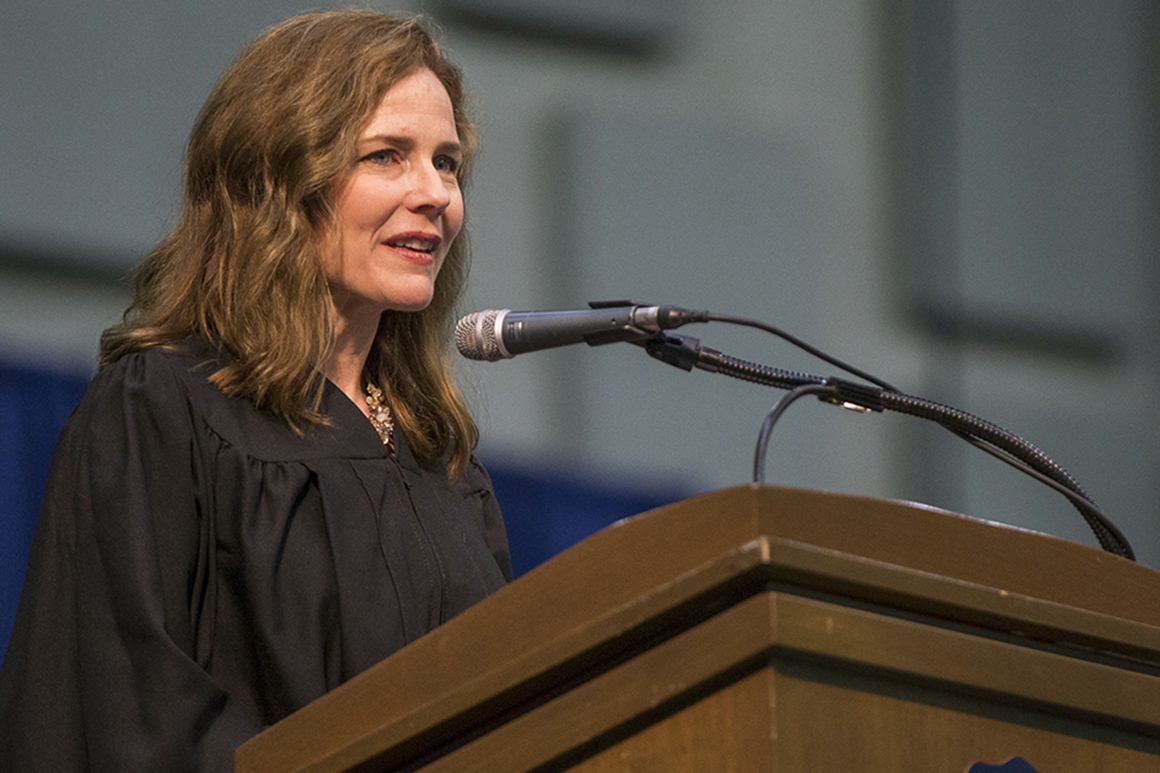 The plan worked better than they could have hoped. Now a judge on the Seventh Circuit, Barrett is the leading contender for President Donald Trump’s nomination to replace Ginsburg on the court. Her ascension would be a coup for Catholic culture warriors 25 years in the making and a high point in the right’s decades-long project of reshaping the judiciary.

“She was kind of the Manchurian candidate,” said one former colleague at Notre Dame Law School. “She’s been groomed for this moment all the way along.”

The notion of a new breed of Supreme Court candidate – younger, so as to serve a long tenure on the court; ideologically consistent but low-key in personality; buoyed by outstanding academic stature and experience on the lower courts – took hold after the searing nomination fight over conservative firebrand Robert Bork ended in defeat in 1987. Bork’s abrasive personality and long history of staking out contentious positions had marked him for defeat. In the future, judicial nominees would need to take greater care to be politically appealing and personally presentable.

Thereafter, the selection of potential Supreme Court nominees by presidents of both parties became high-stakes affairs, with aspiring jurists taking care to craft spotless careers for decades in advance. That was when conservatives, led by the Federal Society, began taking a systematic approach to spotting and grooming potential justices, including Trump’s two nominees to date, Neil Gorsuch and Brett Kavanaugh.

Barrett is a product of the same system. At 48, she has been preparing for a potential nomination one way or another for the majority of her life. A native of New Orleans, she arrived at Notre Dame Law School in the fall of 1994, fresh out of Rhodes College, a small, liberal arts school in Memphis Tennessee. Sharp, attractive and devout, she quickly gained the notice of politically minded professors.

Prominent among them was John Garvey, according to former colleagues who spoke on the condition of anonymity to discuss the tight-knit world of Catholic legal scholars. Reached on Saturday, Garvey, now the president of Catholic University, declined to comment because of the recent timing of Ginsburg’s death.

Garvey — who had served as assistant to Solicitor General Ted Olson in Ronald Reagan’s Justice Department — arrived as a professor at Notre Dame the same year that Barrett matriculated as a student, and began steering the composition of the faculty into a more conservative, more traditionally Catholic direction.

“They were trying to create a certain phalanx of people mainly to overturn Roe, but also to prioritize religion,” the former member of the Notre Dame Law School faculty explained of Garvey and his allies.

An observant Catholic and a member of People of Praise — a small, devoutly spiritual Christian community known for fostering strong bonds among its members — Barrett espouses a conservative approach to interpreting the Constitution with a strong deference to religious values.

Garvey collaborated with Coney on a law review article that argued Catholic judges should recuse themselves from capital cases because the church’s opposition to the death penalty presented an irresolvable conflict with civil law. The paper was scrutinized at Barrett’s 2017 Senate hearing for her Seventh Circuit nomination as possible evidence that she believed Catholic jurists must either adhere to church teachings or recuse themselves.

In 1995, the conservative legal star Bill Kelley joined the Notre Dame faculty and became another champion of Barrett. Kelley, who declined to comment, has long been active in the Federalist Society, helping to encourage future conservatives legal stars.

Before coming to Notre Dame, Kelley had clerked for Judge Ken Starr of Whitewater fame on the D.C. Circuit of the U.S. Court of Appeals as well as for Chief Justice Warren Burger and Justice Antonin Scalia on the Supreme Court. More recently, as deputy White House counsel under President George W. Bush, he helped guide the Supreme Court nominations of John Roberts and Samuel Alito.

Patrick Schiltz, now a federal district court judge in Minnesota, also joined the Notre Dame law faculty in 1995 and championed Barrett, according to former colleagues. Schiltz, whose chambers did not respond to a request for comment made over the weekend, had clerked for Scalia as a D.C. appeals court judge, before helping prepare him for his nomination to the Supreme Court, where Schiltz then clerked for Scalia again.

Barrett did not disappoint her mentors, graduating first in her class, and proceeding to clerk with Judge Laurence Silberman on the D.C. appeals court. The next year, with the support of her former professors, she clerked for Scalia.

Scalia, who died in 2016, was among the most prominent advocates of the theory of original intent, in which laws are interpreted in light of what their authors intended them to mean at the time of writing — an approach that ruled out the kind of interpretation of evolving standards of justice that led to the Roe decision. He was both a conservative icon and a fierce combatant in the U.S. culture wars. He was also a devoted mentor of younger conservatives. Scoring a clerkship with him offered a sure path to the top of the conservative legal movement.

It has become common, as competition for elite clerkships has intensified, for endorsements from professors and former clerks to be instrumental to securing a spot. But Barrett’s peers described the effort that Notre Dame professors put into promoting Barrett’s career as extraordinary.

“At most schools you see a whole cohort that is groomed this way,” said one former colleague, who explained that when it came to Coney and Notre Dame, the faculty pursued “a targeted effort around one particular person.”

Her commitment to conservative jurisprudence and the image she cut as a bright and energetic young woman with traditional values — she has since gone on to become the mother of 7 children — made her an appealing prospect at a time when the right’s efforts to shape the judiciary have been associated with an image of stodgy men taking away abortion rights.

When her Supreme Court clerkship under Scalia ended in 1999, Barrett began working as an associate at Miller, Cassidy, Larroca & Lewin, in Washington, just as a friend from the conservative legal world, Rick Garnett, was leaving the firm to join Notre Dame’s law faculty. Garnett declined to comment, other than to describe Barrett as “brilliant and nice.”

Just three years later, Barrett returned to Notre Dame Law as a professor. At the time, the school had been working for several years to raise its academic profile, which entailed hiring faculty who had mainly graduated from more elite law schools. It was somewhat rare, then, for the school to hire one of its own graduates, according to two members of the faculty at the time. But Kelley and her other champions were determined to bring her back, they said.

“There was just a huge plan to bring her back onto the faculty,” said one former colleague.

The other former colleague said that by this time, Barrett’s mentors were already beginning to speak of her as a potential Supreme Court justice.

As a professor, Barrett generally impressed her colleagues. “I knew her to be a great teacher and very devoted to her work but also very devoted to her family,” said Vincent Rougeau, now the dean of Boston College Law School. Barrett shares the care of her seven children, two of them adopted, with her husband Jesse Barrett, a fellow Notre Dame law grad and former federal prosecutor who is now in private practice.

“She seemed to balance all of those obligations very well,” Rougeau said.

As a professor, Barrett offered some criticism of the court’s decision in Roe and belonged at various times to the Federalist Society, factors that will strongly weigh against her among liberals. But they’ve also marked her as an enduring product of the movement and institutions that championed her career from the start. And they repaid her loyalty.

In 2017, after Trump nominated her to the 7th Circuit, every full-time member of the Notre Dame law faculty – a group that included both liberals and conservatives — signed a letter to the Senate Judiciary Committee praising her as a sharp legal mind and able teacher.

“We are hard-pressed to imagine anyone who could be more congenial and constructive,” they wrote.

Terry Bradshaw Is One Proud Grandpa on The Bradshaw Bunch

Kanye West Surprises Kim Kardashian With a Hologram of Her Late...

Terry Bradshaw Is One Proud Grandpa on The Bradshaw Bunch

The Boys of New Girl Reunited and It Was Everything We...