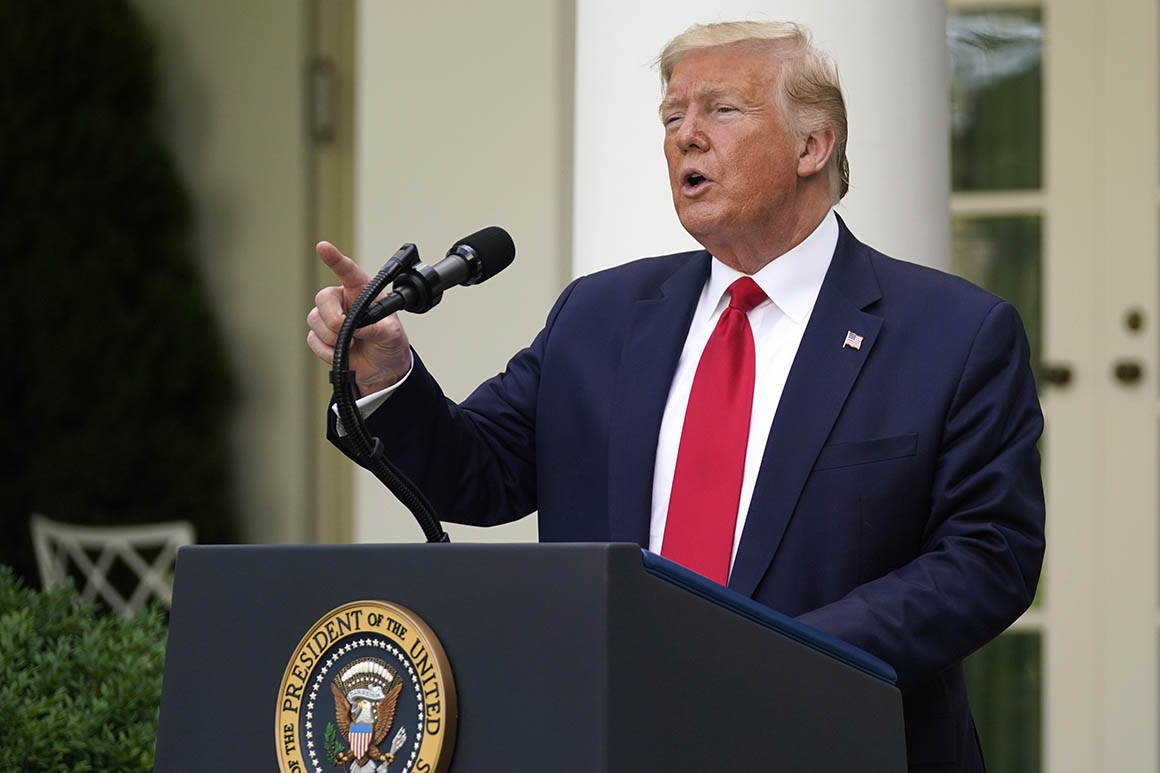 These are answers to some key questions about Thursday’s announcement, based on early draft language that may change by the time Trump signs the order:

What is Trump doing exactly?

The president is expected to sign an executive order that calls on various agencies to take a hard look at the long-standing legal protections that safeguard online companies from libel suits and other litigation. These protections, under a statute known as Section 230, are a crucial tool that companies like Twitter and Facebook rely on to amass their fortunes — offering Trump a potent target in his crusade against what he calls pervasive censorship of conservatives.

But it’s an open question whether regulators will follow through on his plans, which would be sure to draw swift legal opposition. His order depends a lot on decisions by agencies like the Federal Communications Commission and Federal Trade Commission, which are not subject to his direct control, as well as state attorneys general.

Why is he doing this?

Trump for weeks has teased action to address Republican allegations that social media platforms stifle conservative viewpoints, tweeting earlier this month that “the Radical Left is in total command & control of Facebook, Instagram, Twitter and Google.” He added: “The Administration is working to remedy this illegal situation.”

No conclusive evidence exists of an anti-GOP bias on platforms like Facebook, Google and Twitter, and the companies have consistently denied intentionally suppressing any political viewpoints as they enforce policies against hateful or dangerous conduct. But the president and his allies escalated their attacks on Silicon Valley this week after Twitter added fact-checking labels to a pair of Trump’s tweets for the first time.

Trump had tweeted without evidence that mail-in ballots in this year’s elections are likely to be “substantially fraudulent,” a claim Twitter said misled users about the electoral process. One member of the Federal Election Commission, Democrat Ellen Weintraub, has called the allegations a baseless “conspiracy theory.” Independent fact-checkers have also found the claims to be unsubstantiated.

Trump vowed on Wednesday to take a “big action” against Twitter and other social media companies after the controversy erupted.

“This will be a Big Day for Social Media and FAIRNESS!” Trump tweeted Thursday morning.

What exactly would Trump’s order do?

It would take various tracks. For one thing, Trump’s order would direct the Commerce Department to ask the FCC to review when websites qualify for Section 230’s legal protections, according to a draft reviewed by POLITICO. It would prohibit federal agencies from advertising through social networks that “violate free speech principles,” and gives agencies 30 days to report their spending and the “viewpoint-based speech restrictions” on the platforms where they’ve spent money.

Finally, it tasks the FTC and state attorneys general, in partnership with the Justice Department, to review whether internet companies have deceived or been unfair to users by censoring political speech beyond what they have publicly disclosed.

Section 230, part of a 1996 law called the Communications Decency Act, broadly shields websites from being sued for content their users post — or for taking down material that they “in good faith” believe to be “obscene, lewd, lascivious, filthy, excessively violent, harassing, or otherwise objectionable.” That once-obscure section has been crucial to the fortunes of companies like Facebook, Twitter and Google that make money from all the tweets, likes, photos and videos put up by their users, as well as smaller firms that set up shop online.

Now Section 230 has become a political target for leaders of both parties, who think Silicon Valley giants are botching their handling of political and other forms of speech online. Those include Republicans, like Trump, who accuse the tech giants of censoring conservatives — but also Democratic lawmakers who say the companies don’t do enough to curb politicians’ lies, targeted harassment and hate speech.

The agencies can’t rewrite a law that Congress has passed, can they?

No, but Trump is asking them to review when the law can be applied. It’s an open legal question whether agencies like the FCC can or should make the kinds of legal determinations that Trump is asking for, and any decisions they make would probably become a matter for a judge to decide.

Has Trump tried asking Congress to rewrite the law?

Trump has yet to directly comment on the legislative push to overhaul Section 230, but some of his supporters want to do just that. They include Rep. Matt Gaetz (R-Fla.), a Trump ally who said Wednesday that he’s drafting a bill to roll back the protections if companies engage in “editorializing” or “opine as to the truth or falsity” of statements online. Gaetz told POLITICO last year that he raised his issues with the law with top White House officials.

Sen. Josh Hawley (R-Mo.), another top Trump ally and a leading GOP tech critic on Capitol Hill, similarly introduced a bill that would remove the legal shield from companies if they cannot prove to regulators that they are not stifling certain viewpoints. Sen. Marco Rubio (R-Fla.) has jumped on the bandwagon, too, tweeting Sunday that the law “protects social media companies like @Twitter because they are considered forums not publishers. But if they have now decided to exercise an editorial role like a publisher then they should no longer be shielded from liability & treated as publishers under the law.”

Trump broadly praised Hawley’s legislative efforts on big tech at the White House social media summit last year, which the lawmaker attended and spoke at. The latest Twitter dustup could give Trump supporters like Hawley and Gaetz added fodder to push for their proposals.

So will Congress act on the bias charges?

Any GOP-led effort to address bias allegations by amending Section 230 would be dead on arrival in the Democratic-controlled House, and has failed to pick up any significant backing even in the Republican-led Senate. That campaign has even faced opposition from conservative officials and advocacy groups that largely want Washington to keep its hands off the internal decisions of private companies.

“I want to be very clear: I’m not for gutting Section 230. It’s essential for consumers and entities in the internet ecosystem,” Rep. Cathy McMorris Rodgers (R-Wash.) said at a hearing on the legal shield last year. “Misguided and hasty attempts to amend or even repeal Section 230 for bias or other reasons could have unintended consequences for free speech and the ability for small businesses to provide new and innovative services.”

Haven’t some Democrats called for rolling back the legal shield, too?

Yes, but allegations of bias are where bipartisan agreement on Section 230 ends.

The issue has gained attention in the 2020 presidential race, with presumptive Democratic nominee Joe Biden calling for the legal shield to be entirely “revoked.” But Biden said the action was needed because platforms like Facebook are “propagating falsehoods they know to be false” — pretty much the opposite of Trump’s complaints that they’re too quick to label or take down conservatives’ messages.

A bipartisan group of senators, led by Trump ally Lindsey Graham (R-S.C.), is pushing for a different update to Section 230 that would require websites to prove to regulators they are taking sufficient steps to combat child exploitation to keep those protections. That bill wouldn’t address the bias allegations, however.

What else has the White House tried on social media bias?

It’s ramped up a lot of public pressure — in keeping with a longstanding Republican tactic of using critiques of the mainstream media, and now Silicon Valley, to rile up supporters.

Last spring, for example, the White House launched a website to solicit people’s accusations that social media companies had censored them, but it never disclosed what it did with the information it collected — which included personal details like users’ citizenship status.

Later that year, the White House held a gathering of conservative lawmakers and right-wing social media personalities that the administration billed as an exploration of “all regulatory and legislative solutions to protect free speech and the free speech rights of all Americans.” Trump said at the time he planned to haul in executives from the big tech companies for follow-up discussions, but the only such meeting to come to light was a private dinner last fall with Facebook CEO Mark Zuckerberg.

Discussions of alleged anti-GOP bias on social media also came up at a Justice Department summit with state attorneys general in 2018, under then-Attorney General Jeff Sessions, as POLITICO reported at the time. The talks triggered fears among industry executives that the Trump administration was politicizing unrelated reviews into the conduct of Silicon Valley giants.

What have the courts said?

Federal judges have said repeatedly — as recently as Wednesday — that online companies are private businesses with a legal right to police content on their sites. They have rejected claims that platforms like Twitter are trampling on people’s First Amendment rights by deleting their posts or even banning them altogether.

In Wednesday’s ruling, the D.C. Circuit Court of Appeals rejected a suit that right-wing provocateur Laura Loomer had filed against Google, Facebook, Twitter and Apple. Loomer, a Trump supporter, has been banned from multiple platforms for making anti-Muslim statements.

“In general, the First Amendment ‘prohibits only governmental abridgment of speech,’” the court said. And Silicon Valley, for all its power, is not the government.

Is there any harm in what Trump is proposing?

His critics among tech industry and civil liberties groups call it an alarming attempt to intimidate companies’ exercise of free speech. But some tech experts say it could also take attention away from a debate that Congress and the executive branch need to have — has this legal immunity handed Silicon Valley too much power over what billions of people see and read, even on issues as vital as this year’s elections or the coronavirus?

“The draft is 95% political theater — rhetoric without legal foundation, and without legal impact,” said Daphne Keller of the Cyber Policy Center at Stanford University. But she added, “the real takeaway should be that this EO is a distraction. We have only ourselves to blame if it makes us avert our gaze from the crises that are right in front of us, and that urgently need attention: 100,000 Americans dead in a profoundly mismanaged pandemic, for example, or the potential failure of democratic process in the 2020 elections.”