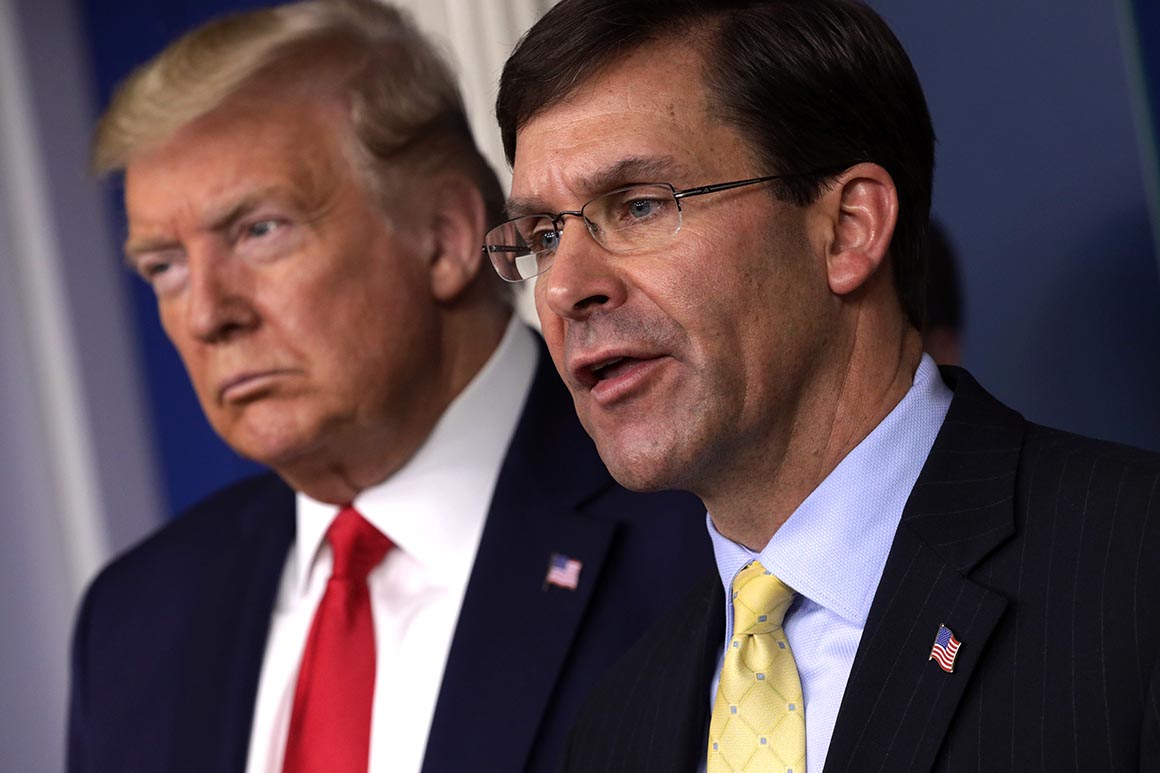 But DoD-wide travel restrictions did not go into effect until March 11, when Esper banned movement of DoD civilians and families traveling to, from or through “Level 3” locations — such as South Korea, Iran and Italy — for 60 days.

In some ways the Department of Defense has been ahead of the curve on the coronavirus crisis. Even before the first cases were reported in South Korea on Feb. 2, the commander of U.S. Forces Korea began enforcing strict measures in January, including testing, self-isolation and social distancing. Pentagon leaders began contingency planning for the crisis six weeks ago, said another defense official.

The Defense Department has also been conducting regular, sometimes twice-daily, press briefings on the crisis in recent days, sending senior officials such as Esper, Air Force Chief of Staff Gen. David Goldfein, National Guard Bureau Chief Gen. Joseph Lengyel and others to the podium to talk about the department’s response. This is a sharp contrast to the State Department, where Secretary of State Mike Pompeo has been criticized for a lack of transparency.

But until this week, department leaders were not always on the same page. While Esper believes commanders and service leaders are in the best position to make major decisions for their forces, he has given explicit instructions to those officials that any major decision needs to be communicated up the chain of command, officials say.

After being blindsided on multiple occasions over the past few weeks, Esper has had to intervene at lower levels to ensure the department presents a unified front, three current and former defense officials tell POLITICO.

“It comes back to: we shouldn’t learn about these through media channels or them becoming public,” said one defense official. “But the last thing we want to do is hamstring those commanders.”

Sign up for Morning Defense, a daily briefing on Washington’s national security apparatus.

After the Army on March 8 preempted DoD in ordering a halt to the movement of troops and their families into and out of Italy and South Korea, Esper was forced to step in, two defense officials said. The secretary stressed to Army leadership the need to keep him and the Joint Chiefs informed of any new guidance, according to the officials. The Pentagon on Monday banned all domestic and international travel through at least May 11.

Esper intervened once more over the weekend after the Army considered freezing basic training for new recruits amid concern about virus spread, according to three defense officials. The Washington Post first reported the Army’s move. Esper met with the leaders of the armed services on Monday to discuss the issue, ultimately deciding to continue basic training while taking precautionary measures, one of the defense officials said.

Since Monday, Esper and the rest of the department have spent a good bit of time in front of cameras. Speaking alongside Trump on Wednesday, Esper said that in addition to preparing the hospital ships, which are equipped with 1,000 beds each, he has alerted field and expeditionary hospitals to be prepared to deploy as needed to support the response. These capabilities are designed for trauma and other combat injuries, Esper stressed, and will be used to relieve pressure on civilian hospitals treating coronavirus victims.

Separately, the Pentagon has opened its 16 certified coronavirus testing labs to test non-DoD personnel; will make available up to 5 million respirator masks and other personal protective equipment from its own reserves; and will distribute up to 2,000 deployable ventilators to the Department of Health and Human Services, Esper said.

“We have plans in place. We’ve been implementing them now for several weeks. And we’re also wanting to lean forward and support again, the whole government approach to assist the American people,” Esper said on Fox.

My Music Moments: Zara Larsson Shares the Soundtrack to Her Life

My Music Moments: Zara Larsson Shares the Soundtrack to Her Life