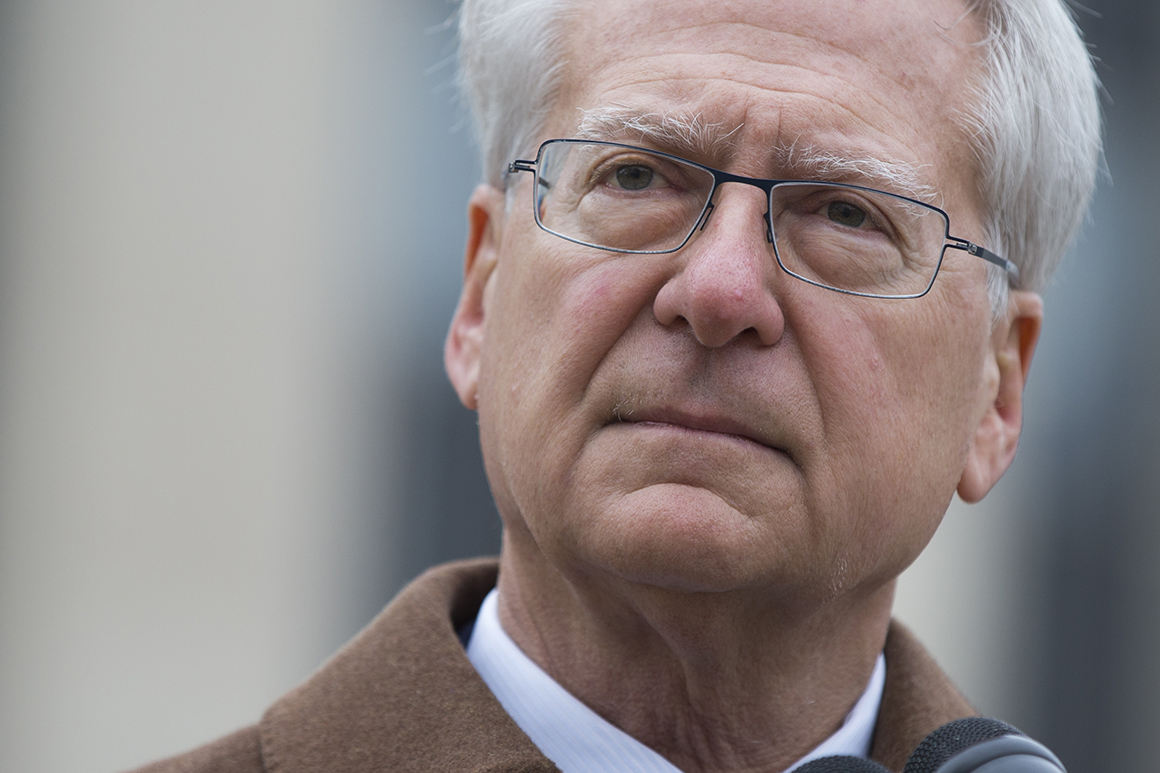 A key element of Klayman’s defense before the ethics panel was to downplay his Republican ties and emphasize instead that he has sued presidents and other political figures from both major political parties. The second and only slightly less explicit thrust of his defense was that he has many friends and clients who are African American.

“I’ve told people that if I had won, you would have been my choice for attorney general,” Keyes told Klayman during the hearing, beaming in on Zoom from the anchor desk at a television studio.

“You and I have never had an issue when it comes to character, integrity and your honoring your word,” said Williams, who spoke sitting in front of a T-shirt from Dr. Ben Carson’s 2016 presidential campaign. “That I can absolutely say is true, yes. You always honor your word—even as a lawyer, yes.”

“Steadman Graham, you actually were partners with him, that was Oprah’s boyfriend for a while, right?” Klayman asked Williams.

“How do we refer to each other?” Klayman asked.

At another point, Klayman called the panel’s attention to a recent success: a ruling he won in Manhattan federal court earlier this year allowing former U.S. Senate candidate Roy Moore (R-Ala.) to proceed to discovery in a defamation suit against comedian and filmmaker Sacha Baron Cohen.

Klayman never directly explained the relevance of the judge’s race or of Pennie’s, but two of the three members of the bar committee hearing the ethics case are African American and the online biography of the panel’s chairwoman, Mims, prominently describes her as the co-chair of the Diversity & Inclusion Committee at her law firm.

Klayman’s effort to demonstrate his exemplary character took other unusual turns, as he read from jacket blurbs from his own books and from articles written by his supporters. As always, there was no understatement.

“There were other men like Larry early in American history. Their names were Washington, Jefferson, Madison, and Henry,” conservative editor Joseph Farah wrote in a 2004 article Klayman read to the ethics panel Tuesday. “They don’t make ‘em like that any more.”

In his various ethics battles over the years, Klayman has also received some backing from figures closer to the political mainstream and — in one instance — at the other end of the political spectrum.

Ronald Rotunda, the late, widely respected legal ethics authority, wrote a detailed letter defending Klayman and testified on his behalf in one case alleging conflicts-of-interest. Rotunda, who served as Democratic counsel to the Senate Judiciary Committee during Watergate and later as an ethics adviser to Whitewater Special Counsel Kenneth Starr, died in 2018.

“He has had a number of cases before me over my 30 years as a judge, almost from the beginning. Many were quite controversial as well as newsworthy, and some extended for length periods of discovery and motions,” Lamberth wrote. “There is no question that Mr. Klayman is a zealous advocate for his client and his cause, but I also have no question regarding his fitness to practice law.”

A leading liberal constitutional law expert, University of California at Berkeley law dean Erwin Chemerinsky also testified on Klayman’s behalf earlier in the ethics case stemming from the Bundy prosecution. The esteemed law professor concluded there was no ethical violation by Klayman in the Bundy case, Klayman told the panel. (Chemerinsky confirmed to POLITICO Tuesday that he testified for Klayman, but the professor said he could not recall the details.)

While many view Klayman as an early pioneer of the use of the legal system as a political weapon, he seemed to lament that phenomenon during this week’s session, rueing what he called “the age of the politics of personal destruction” in an ironic echo of a famous Bill Clinton line.

“We live in an atmosphere that is so polarized that anyone who doesn’t agree with you becomes an enemy of the state and should be removed from the practice of law,” Klayman complained.

Klayman claimed repeatedly during the hearing that he is being targeted by liberal lawyers who are going after Trump supporters and conservatives. However, he also has engaged in pitched legal battles with top figures in Trump world, like Roger Stone and Health and Human Services spokesman Michael Caputo.

A deposition of Stone Klayman conducted in February in connection with a series of libel cases produced a slew of bitter, nasty exchanges between the two men, who worked together briefly on Klayman’s unsuccessful bid for the U.S. Senate from Florida in 2004.

Stone, who seemed enamored of Klayman’s tactics when they were directed at Democrats, was considerably less enthused about being interrogated by the former federal prosecutor.

“Let’s go,” Stone said at one point, seeming to gesture at Klayman to fight him. “I don’t have to be badgered by this asshole.”
The danger for Klayman at present is not so much the Bundy-related complaint but the series of ethics cases he faces taken together. Bar ethics officials say the record is mounting that Klayman is unfit to practice.

“They’re piling on, one after another,” he complained Tuesday.

Klayman is currently serving a three-month D.C. bar suspension for pursuing cases against Judicial Watch, which he left in 2003, on behalf of several of its ex-clients. In July, another hearing committee also a recommended 33-month suspension for alleged “misconduct” involving pursuing a romantic relationship with a client. He has complained that the findings were politicized.

Klayman told the panel Tuesday that he would not handle some of the legal matters the same way if he had another chance, but he said he had no regrets about the tactics he used to try to get permission to represent Bundy in the criminal case. “I tried to fight my way in,” he acknowledged. “You can’t be a wallflower, particularly in today’s world.”

Klayman also asked for leniency by saying he serves as a lawyer of last resort for many of his clients. That seemed to strike a chord with Mims, the panel chairwoman, who asked one witness whether suspending Klayman from legal practice could limit some clients’ ability to find representation.

The other panel members, former Federal Trade Commission deputy general counsel Christian White and prisoner rehabilitation advocate Robin Bell, occasionally broke out bemused smiles at some of Klayman’s antics but were generally silent during the hearing. The panel will vote on a proposed sanction for Klayman, but the case will then go to a larger bar board and eventually to the D.C. Court of Appeals for final resolution.

Porter suggested that Klayman was often providing poor quality counsel by missing court deadlines and filing meritless cases. She also said that being a zealous advocate was only one obligation of an attorney and Klayman was flouting many of the others.

“Mr. Klayman’s conduct not only in the underlying matter but in these discipline proceedings confirm that he is unable to comply with his ethical obligation as an officer of the court,” she said. “You can’t use the litigation process of courts to retaliate and intimidate. … Politics really has nothing to do with it.”