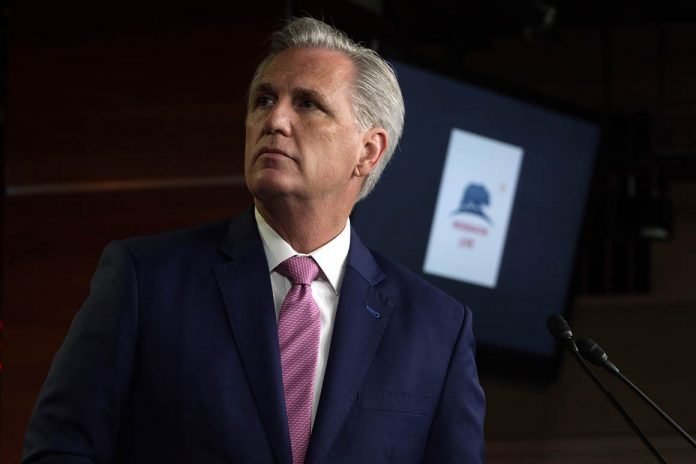 But McCarthy did not formally withdraw his backing until Monday, after POLITICO asked him for comment on a video it obtained of Howze telling supporters last week that McCarthy pledged to support his campaign if the race looks winnable in the fall.

“We’ve talked with Leader McCarthy,” Howze told supporters in a video call obtained by POLITICO. “They’ve told us, keep doing what we’re doing. Raise money. If in September we are one of the competitive races in California that they will be here to come into the race.”

In the video, Howze addresses a woman asking about news reports that Howze’s campaign would not receive money from Washington Republicans. He tells her that the National Republican Congressional Committee has “never committed to give us a dime in this race. And they won’t give a dime to any race until September.”

And he lashed out at national and local media reporting on his posts. “They’re trying to half-deal in this truth to try to make a bigger deal out of this,” he said in the video. “Bottom line is this: We work our tails off, we keep raising money, come September we’ll be fine.”

California’s 10th Congressional District was hotly contested in 2018 when Harder ousted then-GOP Rep. Jeff Denham by 5 points. Yet the race was not in the top tier of Republicans’ 2020 targets, in part because Harder has amassed a formidable war chest. He had banked over $3.5 million by the end of March.

But Howze is personally wealthy and has some ability to self-fund. Before the posts surfaced, some party operatives had not ruled out investing in the race if it appeared competitive in the fall, particularly because the district lies in a relatively inexpensive media market.

Howze has repeatedly denied that he wrote the dozens of social media posts in question, instead claiming that unnamed individuals gained access to his Facebook and Twitter accounts.

The posts appeared over the course of several years and on Facebook and Twitter. Howze signed one of them and tagged family members in others. Some posts refer to the Islamic Prophet Muhammad as a rapist and a pedophile. Others accused prominent Democrats of murder and mocked the survivor of the Parkland school shooting.

The rescinded endorsement from the leader makes it unlikely that Howze will receive outside support. And the decision underscores the uncomfortable spot McCarthy is in as he attempts to plot a wide path back to the majority while also supporting his party’s attempt to regain standing with minority voters.

California state GOP Chairwoman Jessica Millan Patterson, a key McCarthy ally, wrote in a statement revoking the party’s endorsement that Howze’s posts “do not represent the values we hold or the party we are building.”

“The California Republican Party is proud of the extremely diverse board and candidates we have recruited,” she said. “We have also proudly recruited candidates and leaders across the state who represent the values and diversity of our communities and our state.”

The GOP has, in recent election cycles, spurned candidates for their past statements. In 2018, the GOP nominee in a South Jersey seat where the incumbent Republican was retiring was found to have promoted articles from white nationalist websites and made other, anti-diversity comments. The NRCC revoked its endorsement, and the Democratic candidate went on to win in November. (Republicans reclaimed that district last year, when Democrat Jeff Van Drew changed parties.)