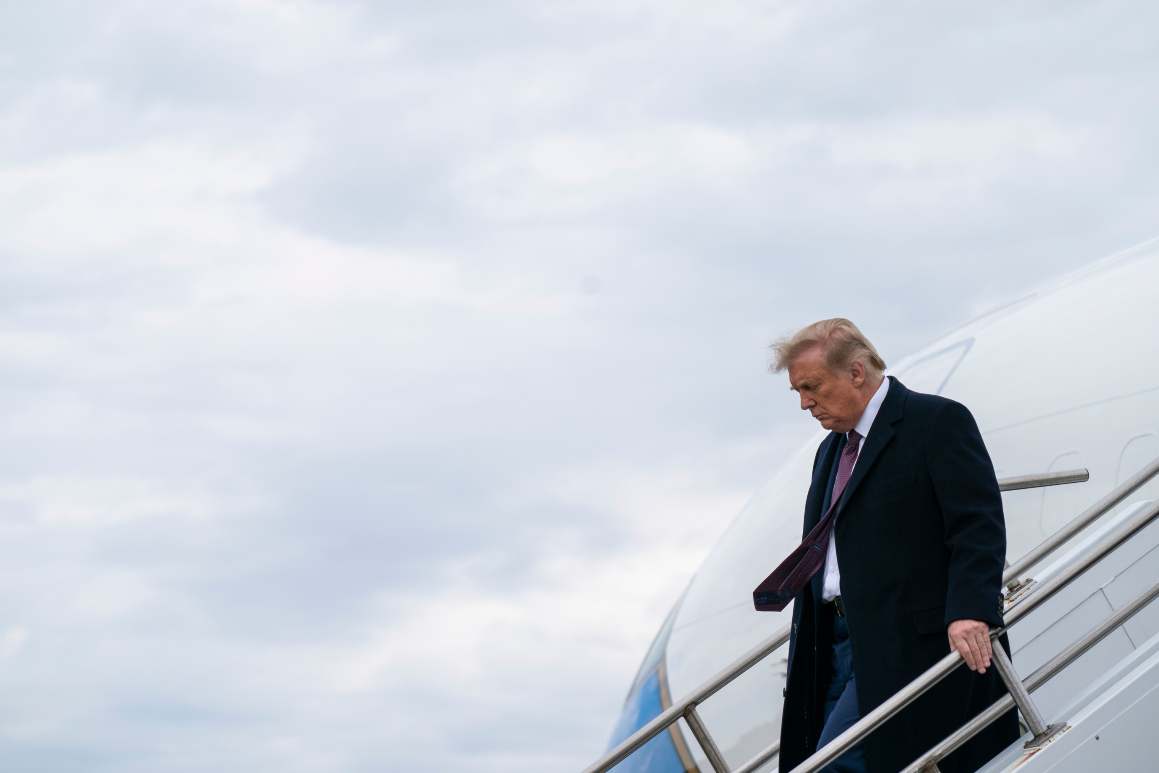 Sixty-two years after Eisenhower’s letter, another American leader is in the hospital, and the circumstances around his condition are equally murky. His doctor insists he is well, while anonymous officials whisper to reporters that he might not be.

Questions are swirling about what happens if President Donald Trump, a man not known for his probity or transparency, becomes incapacitated. To a large extent, Covid-19 remains a mysterious disease, with uncertain long-term consequences and a penchant for taking sudden, violent lurches for the worse in its hosts.

And the 25th Amendment, a rough map for replacing a president should he die, resign, or become disabled in some way, provides some answers — but not all.

It allows for temporary transfers of authority, such as in 2002 and 2007 when President George W. Bush transferred authority temporarily to Vice President Dick Cheney for a few hours each time while he underwent routine colonoscopies. In 1985, then-Vice President George H.W. Bush performed the duties of the presidency for roughly eight hours while President Ronald Reagan underwent colon surgery.

But today, the rules governing a temporary transfer of power remain anything but clear, former officials say, with sweeping implications not only for governing the United States but also American national security.

After the announcement of Trump’s diagnosis early Friday morning, the White House counsel would normally begin drafting a letter in case of a transfer of power, said one former White House official. But in previous scenarios, the transfer of power was to some extent pre-planned and had clear time limits. If Trump becomes incapacitated due to complications from the coronavirus, it could be for an unknown or an extended time period. And, should Vice President Mike Pence also fall ill, the 25th Amendment does not outline who is next in the chain of command.

There is nothing in the law or the Constitution, moreover, that dictates who would actually decide to invoke the Presidential Succession Act if both the president and vice president become incapacitated, said Norman Ornstein, a resident scholar at the American Enterprise Institute. That could theoretically lead to a fight among those in the line of succession.

Even if Pence were able to take over from Trump, the Constitution requires a “cumbersome process” to authorize it, Ornstein said. Notably, that process would require a two-thirds vote from Congress, who may be unavailable to return for such a vote in the middle of a pandemic. Whereas the House has authorized remote voting by proxy, the Senate has not.

The White House appears to have given little thought to the matter. Former officials described an intense effort to prepare for the possibility that Trump or other top officials might become ill with Covid-19, but could not recall discussions inside the White House Coronavirus Task Force about how to ensure that the wheels of government were running smoothly.

Olivia Troye, who worked for Pence on the task force until late this summer, said the group was focused primarily on the public health response—not on what would happen if the president himself, or anyone else in government, got sick. Still, she said, “there are protocols in a situation like this that should’ve been implemented” inside the White House, like mandatory mask wearing and other ways to slow the spread as recommended by the task force doctors themselves. On any typical day, she said, “You would definitely feel out of place walking around in the West Wing with a mask.”

A person close to the White House said that the White House physicians had made plans for the possibility that Trump got infected. “They were war-gaming out what to do and they were evaluating what was going on,” the person said. “It’s kind of a continuous thing … They were constantly evaluating and looking at the research.”

But if there are contingency plans in place for how to govern in Trump’s absence, they do not seem to have been widely shared among senior officials over the last few months.

“I don’t know of any [specific] war game drill,” the person close to the White House said, noting that White House physician Sean Conley’s discussion with the task force mostly concerned protecting the West Wing from infection. “He’s on duty. He’s the president’s fucking doctor so he’s thinking about it constantly.”

Veterans of the Trump National Security Council staff said they were not aware of any planning for such a contingency.

“Look, I have no direct knowledge of this particular situation,” said one of the people. “All I can tell you is the West Wing is just chaos all the time.”

There have been sporadic efforts over the years to address the ambiguities of presidential succession or incapacity — a think tank report here, a blue-ribbon panel there — but they are taking on new urgency now.

Democratic Rep. Jamie Raskin of Maryland, who moonlights as a constitutional scholar, is one of those raising alarms about the inadequacy of the present system.

In an interview Friday, he said the 25th Amendment was largely a product of the nuclear era, designed for a potential mass casualty scenario and not necessarily tailored for modern situations. For that reason, he said, it’s crucial for the White House to establish a “medical chain of command” charged with informing Congress and the public about the president’s condition. An authoritative and non-political voice providing those updates, he added, would be an essential element of shoring up public confidence.

“I hope that the White House today will announce the medical chain of command so that the public and Congress will know precisely who to listen to,” said Raskin, who has filed legislation in recent years intended to clarify the line of succession in an emergency. “We need to have precision about who is in control of the executive branch at all times.”

One of the more urgent considerations is what happens to the country’s nuclear codes. But even that process is murky now, under the circumstances — a highly contagious pandemic when senior officials in the chain of command may also fall ill with an unpredictable virus, or this close to a heated presidential election.

Normally, the president, if he is able, would inform Congress in writing of his intent to voluntarily transfer power to the vice president. The vice president, who is always accompanied by a military aide carrying the so-called “nuclear football” holding launch codes for America’s nuclear arsenal, would then assume the duties of the presidency until the president informs Congress, again in writing, that he can resume the office.

But the Presidential Succession Act does not even provide clear guidance on how, once recovered, a president would take back the office from whomever is performing his duties, according to the Brookings Institution.

And if Trump becomes incapacitated before invoking the 25th Amendment, but does not die, the situation becomes even more complicated — and the guidelines are more vague. In that case, the vice president and a majority of Cabinet members or “of such other body,” according to the text of the amendment, must notify Congress in writing that the president is unable to perform his duties and the vice president will take over.

While there is no formal role for the Pentagon or National Security Council in the process, “in a moment like this, with the uncertainties of the president’s condition (since we’re not being told much),” the vice president’s chief of staff or national security adviser “may want a quick refresher,” said the former White House staffer.

“The general concern is an adversary may think Washington is so distracted by this that they could do something and the U.S. would not be positioned to respond in a timely way,” they added.

A defense official agreed, noting that the Pentagon’s role in this case is to “prepare for contingencies in case a bad actor tried to take advantage of a transfer for power.” There is a process for that too: Depending on the intelligence, the National Military Command Center would be alerted, and would then notify the geographic combatant commands to inform the force of what is occurring.

But the gaps in the 25th Amendment and the presidential succession act continue to raise serious concerns among experts. “Russia, Iran, China and other foreign adversaries are watching,” Ornstein said. “And they know that if there is any period of time where there are any questions about the chain of command, it leaves us vulnerable.”

14 Healthy Summer Snacks You Need to Treat Yourself to ASAP

14 Healthy Summer Snacks You Need to Treat Yourself to ASAP